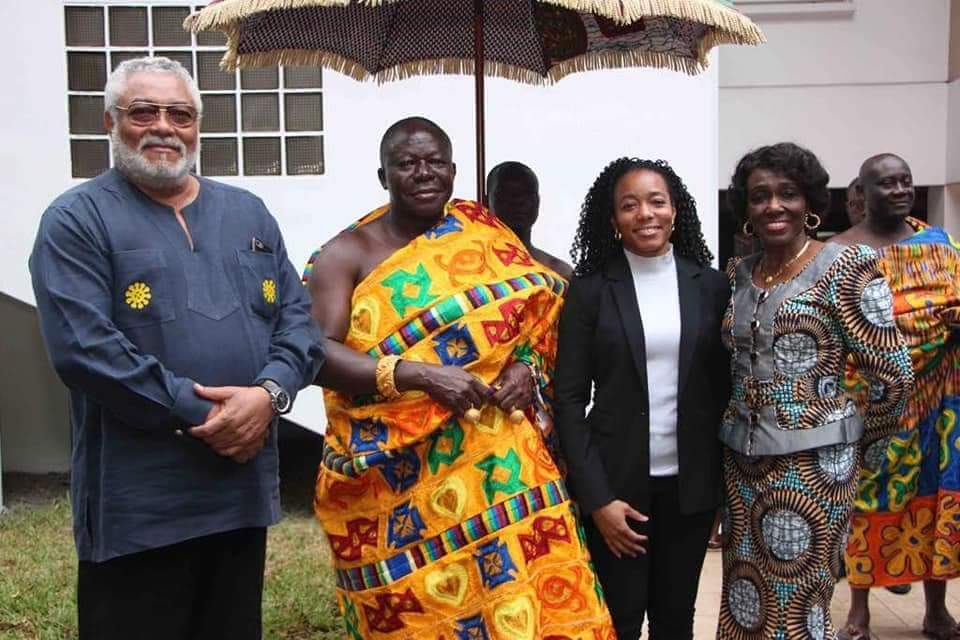 Former President Jerry John Rawlings has paid glowing tribute to the memory of the Asantehene, Otumfuo Osei Tutu II as the latter marks two decades since his ascendancy to the Asanteman throne.

He lauded the Asantehene for his efforts towards addressing land-related problems in Asanteman and promotion of education in Asanteman.

He said Otumfuo Osei Tutu II have on various occasions helped to resolve complex chieftaincy disputes including recently the several years old Dagbon crisis which paved the way for the enskinment of the new Yaa Naa.

“His Majesty’s recent historic visit to Kyebi and an earlier hosting of the Okyehene in spite of the traditional rivalry between the two kingdoms was yet again a great exhibition of his dynamism and desire to spread the spirit of unity and the spirit of one Ghana,” Rawlings noted.

In the Facebook post, he stressed that Otumfuo’s reign as Asantehene has elevated the image of Asanteman and brought “a refreshing new aura to the institution of chieftaincy in Ghana.”

Read the full message below:

In 2014, when Otumfuo Osei Tutu II celebrated his Crystal anniversary I had the occasion to celebrate him for his sound sense of judgement, wisdom and political astuteness.

Five years on, on the occasion of the 20th anniversary of Otumfuo’s ascension to the throne as Asantehene, I will need to find new adjectives to venerate His Majesty.

As I have previously stated, I did not know Otumfuo before his elevation as Asantehene in 1999. He was a new face and many of my colleagues who also knew little about him were justifiably curious. It took little time however for not only Asanteman but the whole of Ghana to recognize the new Asantehene’s inherent qualities.

Irrespective of the trappings of royalty and the aura that surrounds the custodian of the Golden Stool, Otumfuo Osei Tutu II has endeared himself to most Ghanaians for his sense of political discernment, uplifting of the role of Asantehene, appreciation of the dynamism of the times and the protection of the deep and rich values of not only Asanteman but Ghana as a whole.

I have observed with quiet admiration as Otumfuo Osei Tutu II has ruled over Asanteman with wisdom and fortitude which has brought greater glory to undoubtedly one of Africa’s leading Kingdoms.

Through Otumfuo’s resourcefulness the management of land title registration in Asanteman has been refined and is currently devoid of the controversy and duplicity evident elsewhere in the country. His Majesty has also through the institution of the Otumfuo Educational Fund and Charity Foundation offered thousands of vulnerable young people educational opportunities to the highest level.

For over a decade, Otumfuo has worked tirelessly in partnership with Yagbonwura, Tuntumba Boresa Sulemana Jakpa I and Nayiri, Naa Bohogu Abdulai Mahami Sheriga to resolve the complex Dagbon crises. The processes leading to the enskinment of a new Yaa Naa earlier this year are a clear manifestation of virtues that His Majesty possesses as our celebrated King.

Otumfuo Osei Tutu II’s relationship with the leadership of various political parties has contributed to the deepening of our political development. He has on multiple occasions intervened when deep-seated differences have arisen between major political players, without allowing the allure of political bias to cloud his better judgement.

His Majesty’s recent historic visit to Kyebi and an earlier hosting of the Okyehene in spite of the traditional rivalry between the two kingdoms was yet again a great exhibition of his dynamism and desire to spread the spirit of unity and the spirit of one Ghana.

Otumfuo’s extraordinary charm campaign took him to Seychelles in 2015 in what many thought was an impossible journey for an Asantehene because of the painful history of Otumfuo Agyeman Prempeh’s exile in that country. Historical visits to Suriname, Uganda, Nigeria, Morocco, England, Netherlands, Germany, Swaziland and South Africa are but a few of the visits Otumfuo has embarked upon as an extraordinary ambassador for Ghana.

Otumfuo, your tenure has enhanced Asanteman’s enviable position as a tourism destination with many high-profile visitors insisting on calling on Manhyia during official trips to Ghana.

Your tenure has brought a refreshing new aura to the institution of chieftaincy in Ghana, elevating it to a respectable new level and setting a standard for many to emulate across the country.

On behalf of my wife, Nana Konadu Agyeman and my family, I congratulate you on this significant milestone and wish you long years of great health so you can continue to impart your remarkable leadership qualities not only to Asanteman but also to a new generation of Ghanaians who are inspired by who you are as a great custodian of true dynamic African culture and tradition.

Otumfuo Osei Tutu II [known in private life as Barima Kwaku Duah] ascended to the Golden Stool on April 26, 1999  when he swore the oath of Asante to be faithful to his people.

The climax of the celebration on Sunday will see the Asantehene ride in a palanquin from the Palace to Dwabrem amidst the firing of muskets.

An opportunity will be given to the chiefs and invited guests to pay homage to the Asantehene who will sit in the state.

Cultural displays from various groups will showcase the richness of Asante culture.

Otumfuo Osei Tutu will deliver his anniversary speech, while the Special Invited Guest, who will be coming from outside Ghana, and the Guest of Honour will also give speeches.

Expected to be in attendance for the ceremony are former presidents Jerry John Rawlings, John Agyekum Kufuor and John Dramani Mahama.