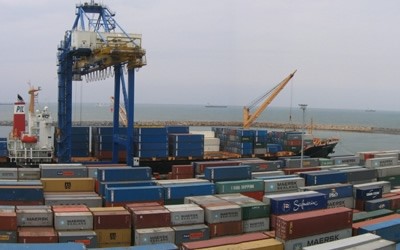 The governing New Patriotic Party (NPP) suspects some officials at the country’s ports may try to sabotage the implementation of the reduction in benchmark values on imports.

The party has said it has alerted government and officials of the Ghana Revenue Authority (GRA) to look out for such persons.

Items like canned tomatoes, vegetable cooking oil, frozen poultry products among others will benefit from the 50 percent reduction.

The move, which took effect from Thursday, April 4, 2019, is to decrease smuggling and make the ports more competitive.

NPP’s General Secretary, John Boadu, warned that any saboteur who frustrates the process will be dealt with.

“We are however informed about the possibility of some officials at the ports and usual saboteurs to frustrate importers and also obstruct implementation.”

“We are by this encouraging government to steadfast and look out for such individuals whose actions and inactions may pose a threat to this policy.”

Pending Parliamentary approval, other initiatives at the ports will see the Abolish service charge of $1.50 per ton of every export and reduce by 50 percent the $2.0 per ton of every import levied by Ghana Shippers Authority.

The importer registration fees imposed by the Ghana Standards Authority will also be removed.

There will also be a review of the security charge of $0.50 per gross tonnage of every vessel coming into Ghana’s waters charged by the Ghana Maritime Authority (GMA).

At the paperless regime at ports continues, the government also plans to for the physical examination of containers to be reduced from over 90 percent to under 10% by June 2019.

Academics can change the world; if they stop talking only to their peers [Article]

Academics can change the world; if they stop talking only to their peers [Article]