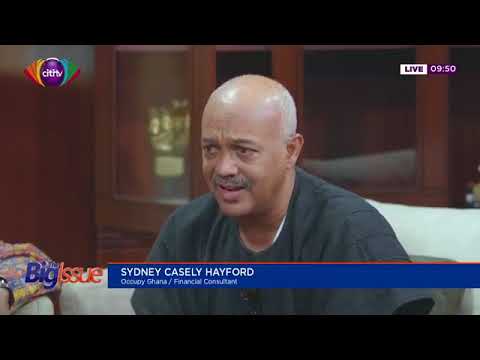 Financial analyst, Sydney Casely-Hayford has chastised the two main political parties in the country — the New Patriotic Party and the National Democratic Congress — for giving conflicting figures about the state of the economy.

[contextly_sidebar id=”27IDerDrwNxqIWm7gKNQlGzCUwYF9QfX”]His comments come on the heels of the recent Economic Management Team  (EMT) town hall meeting by the NPP and the counter-public lecture by the NDC.

Many political and economic stalwarts are divided over the truth or falsity of the outcomes of both events.

Speaking on The Big Issue, Casely Hayford said the ‘noisy’ sentiments from both parties have not solved the economic woes of the country hence they must work to build a data retrieval regime to reverse this worrying trend.

“I don’t really care one way or the other whether the NDC disagrees with the NPP figures or the NPP disagrees with the NDC figures.  We have problems, and those problems are showing us why we cannot get independent numbers for which we can have a reference point. So at the end of the day, we cannot sit down and make too much noise about [figures] it doesn’t make any difference to anybody at this stage.”

“……that your number says its 400, mine said it’s 450. And it is time for us to fix that problem. What is going on is that you have different parties who have their own control of the numbers are creating their own financial statements and projections”, he added.

Provide your own data to dispute our achievements -Bawumia

He challenged the doubting Thomases to bring their own records if any to counter his arguments.

“Our presentation today is based on an analysis of the data and the facts. The data will speak for itself. If you disagree, you should bring your own data and your record. But don’t disagree by saying that the EMT members have big heads, you only resort to insults when you are allergic to facts.”

The Ranking Member on the Finance Committee of Parliament, Ato Forson said Dr. Bawumia only played with numbers and presented lies as facts during his presentation.

“You heard him talk about the likes of the judiciary and the court systems. What has that got to do with the economic management team? He had nothing to say. He was just playing with numbers. And again, you know him and his credentials of lying with numbers.You could see lies,” Ato Forson said.

He said the NPP’s town hall meeting did not come close to the NDC’s public lecture on Ghana’s economy.

“Beyond everything, we took time to explain things systematically. The record for NPP cannot come anywhere near the NDC. The entire attempt made yesterday to create the impression that they have been the better management of the economy, is not so. We have actually demonstrated that that was not the case. Our record as presented at the lecture shows everything the NDC has done,” he said.