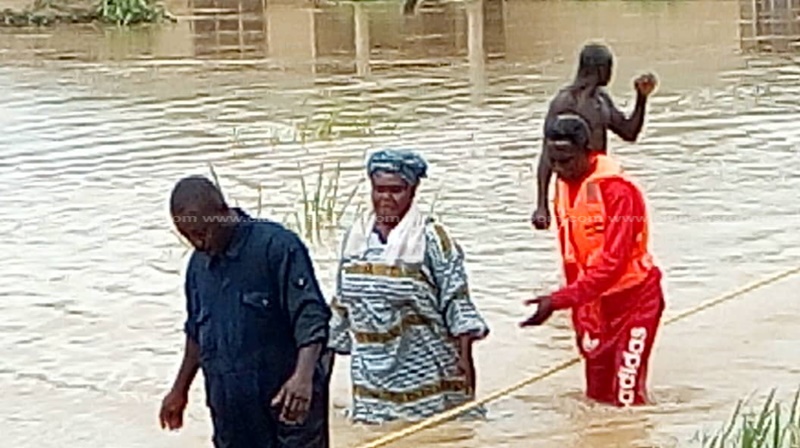 Five people have been confirmed dead following about a 3-hour long downpour on Sunday.

[contextly_sidebar id=”odScKYf62BdADrZeVxRjlNiFjQUCBDuu”]According to the National Disaster Management Organization (NADMO), a middle-aged man was also found dead at Ablekuma, while another was found at Odorna in Adabraka, all in the Greater Accra region although two people were reported to have drowned in that area.

A six-year-old child was also reported missing after the floods at Sowutuom.

The Organization told Citi News that there were reports of a missing military pickup with passengers in its bucket at Adjei Kojo in Ashaiman and three bodies were recovered from that incident, with another body, unrelated to the military vehicle incident also recovered.

“We are still searching for the child’s body. At Circle Odorna, two people drowned and one body has been found. Where the Army pickup fell, another body was found aside the three people in the bucket of the pickup…It is actually about 5 people that are confirmed dead,”the PRO of NADMO, George Ayisi told Citi News.

The Ghana Meteorological Agency (GMet) issued an earlier alert over the rains indicating that “a rainstorm at the southern portions of Togo is forecast to affect places in the southern half of the country.”

The rainstorm according to the Agency affected areas such as Kpetoe, Akatsi, Ho, Kpandu and its environs in the Volta Region.

In the Eastern Region, areas such as Koforidua, Begoro and Nkawkaw were also affected.

Dodowa, Amasama, Afienya and many areas in Accra also experienced the downpour.

Last week, a similar incident left five people dead in Accra, raising concerns over the preparedness of the city for the 2019 rainy season which has been predicted to be more intense compared to what was experienced in 2018.

Several houses and some stores at the Kintampo Market were destroyed and 13 people also sustained injuries and are currently receiving treatment at the Kintampo Government Hospital.

In an interview with Citi News, Head of Forecasting at the Meteorological Service Department, Joseph Portuphy said  Ghanaians should brace themselves for more rainfall in the middle belt and coastal areas.