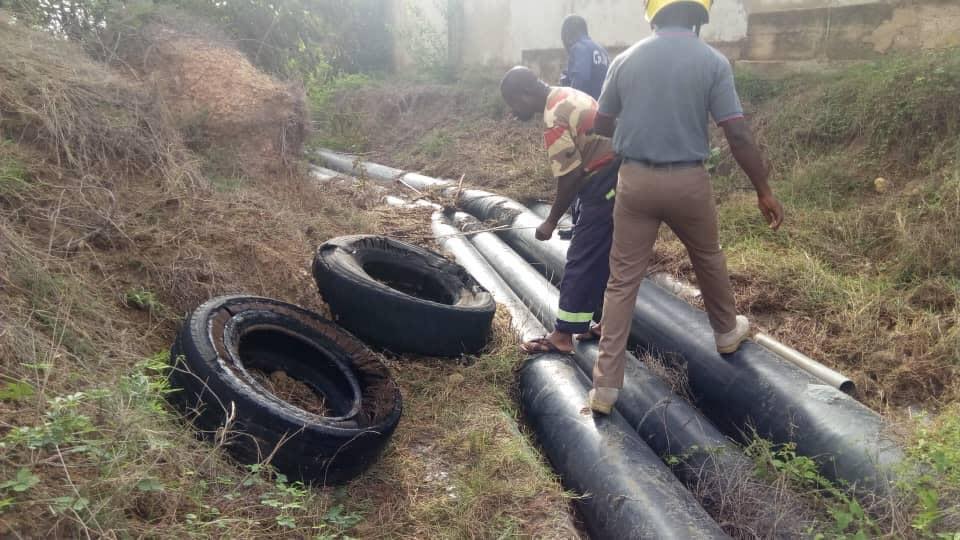 The Institute of Energy Security (IES), has accused the Energy Ministry of seeking to create a false impression over the destruction of some power installations within the Tema enclave.

According to the Institute, the pipeline that was nearly torched in Tema, was filled with water and not [fuel], hence the suggestion that its destruction could affect power supply is inaccurate.

[contextly_sidebar id=”7n8sIubUTTNojJ5U5VGfucKvWFDnhhlX”]Last Monday, the Energy Ministry, said the Police had begun investigating an incident where some persons suspected to be arsonists torched some fuel pipelines within the Tema enclave.

The Security department of the Ghana Grid Company in response to these two cases of damage to the power installations, threatened they will be forced to shoot to kill individuals found committing such offenses.

But IES in a statement wants the Ministry to render an unqualified apology to the people of Ghana.

“We call on the Ministry of Energy to apologize for deceiving Ghanaians into believing that pipelines under construction and filled with raw water are part of the accessories to the power sector installations, and that the destruction to the GRIDCo tower is a contributing factor to the recent Dumsor.”

The statement is also asking the Ministry to provide proof of its claim that the recent developments are as a result of the activities of political saboteurs who are masterminding to impede government’s attempts to address the power cuts.

“The Ministry of Energy must desist from peddling further falsehood and compromising the work of the state security agencies in their quest to apprehend the criminals engage in the act of vandalism. And that if it is privy to any political sabotage, the Ministry must make its evidence available to the agencies tasked to unravel such circumstances.”

Here is the full statement issued by the IES

“The Institute for Energy Security (IES) was enraged when news got to it through the pronouncement of Nana Kofi Oppong Damoah, Head of Communication and Public Affairs at the Ministry of Energy; that some determined persons who wish Ghanaians stay in the recent power crisis for a longer period have torched a gas pipeline belonging to the Volta River Authority (VRA) at the Tema enclave.

By this news we quickly condemned the needless act and proceeded to visit the spot where the act is said to have taking place, only to find that the reported gas pipeline belong to Cirrus Oil Services Limited, and that it is parallel oil pipelines under construction, and filled with raw water.

The IES finds the posture of Mr. Damoah akin to that of the Minister in charge of the Energy Ministry Mr. Peter Amewu, who last sought to suggest political sabotage into the hacking down of GRIDCo’s Transmission tower in Tema, even before state security institutions could collect evidence and start investigation into the matter.

The IES is getting worried about the posture of Government represented by the Energy Ministry towards recent acts of vandalism on energy infrastructure.

While we condemn these acts by faceless persons, the peddling of falsehood by the Minister of Energy and his cohorts following these incidents, only amount to causing fear and panic among the citizenry. Even though the IES believe that any form of sabotage to the country’s power installations must be condemned in no uncertain terms, the situation where political actors use it to cause fear and panic, and possibly win the sympathy of Ghanaians unnecessarily; is equally bad in taste.

Dumsor by its own name is scary. “Dumsor is now a dreaded name in the country; synonymous with the subhuman “Dracula” who sucks human blood and spreads the undead curse along winding roads within the thick, dark and ancient forest and, over mountain passes”.

The Ministry of Energy must spare Ghanaians of “Wolf Cry”, and rather assure the nation of more sustainable measures put in place to curb the recurring and prolonged power outages caused largely by illiquidity in the sector; and not technical or sabotage by cause.”