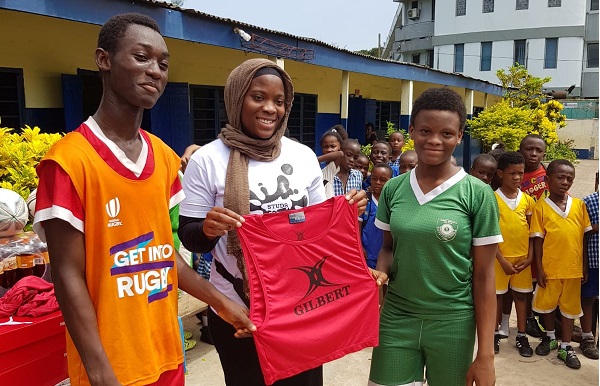 A United Kingdom-based Ghanaian rugby player, Zainab Alema, is aiming to support Ghana rugby at the grassroots level in a project she calls ‘Studs in the mud’.

The project also aims to instill rugby values in children in some selected schools. Through the ‘studs in the mud’ project, she has been able to buy 18 pairs of brand new firm ground rugby boots using money donated by individual donors including rugby fans, friends and family.

“So my project aims to support Ghana rugby at grassroots level, thus instilling rugby values into the community whilst also promoting good physical and mental health,” she said.

She added that it is her personal aim to change perceptions about women in rugby through the project.

“My aim is to send a message to women that they can play sports whilst living their normal lives,” adding that, “sport is good for the body and mind, and I want people to identify with me and have the belief they can play too.”

“Women rugby in Ghana is slowly developing, so hopefully with my story it may boost recruitment into the sport for the women’s side. Aside from all that rugby is not merely a game, but it has the character of building values such as respect, passion, discipline etc, which has positive influence on people that take part in the sport.”

Zainab, who is a mother, a nurse and a Muslim, has also received 42 rugby tops and shirts from the HSBC bank, sponsors of World Rugby 7s series, while her club, the Millwall rugby club in East London UK, has donated some balls and bibs.

As part of her outreach to give back to society, Zainab has donated some of that equipment to the Kanda Cluster of Government School and the Aggrey Memorial International Schools located in the capital city of Accra.

Zainab mentioned that the University of Hertfordshire Rugby Club in UK hosted a Returners vs Current rugby player charity game which raised £350 for ‘studs in the mud’.

According to her, the money was given to women’s rugby development officer Rafatu Inusah, who has used it to organise the rugby fun games events at the two schools.

Following the two donations, Zainab announced she would be presenting some HSBC t-shirts to the champions of this year’s women’s league. She added, “The project is a rolling one, and we aim to be sending rugby goods over to Ghana every year.”

Meanwhile, Ghana rugby has achieved some encouraging milestones in the recent past led by the exploits of the male national team, the Eagles.

Ghana won its first major trophy in Rugby after securing the 2018 Africa Bronze Cup on home soil in 2018.

BoG to get tough on currency import, export violators