Joshua Clottey: “I’m not retired.” But Can “the Hitter” reign again? 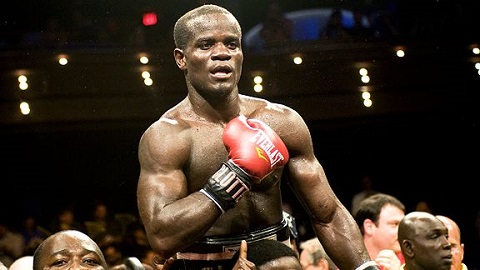 Speaking to Akwasi Afriyie (Rosky) on GN RADIO UK’s Sports Programme  during the weekend, he said the speculation was as a result  of a comment he had made in the aftermath of his last fight which was against Tanzanian Mfaume Mfaume.

It will be recalled, that, prior to the Mfaume Mfaume fight on 8th  March this year, Clottey hadn’t fought since his unanimous decision loss to Gabriel Rosado which was contested at middleweight. That was way back on 19th Dec 2015, over three years since he last boxed.

Three years of inactivity in many professional fields is a really long time, even more so in sports. It’s eternity. A retirement.

As a result of this long period of inactivity, many had already claimed Clottey had retired. There were others who questioned the wisdom in the 41-year Clottey fighting someone who was born just some 3yrs before Clottey himself made his professional  boxing debut.

Perhaps, prompted by some of these uncomplimentary but ultimately, truthful comments, Clottey said he was going to use the Mfaume Mfaume fight to find out where he stood in his boxing career.

As it transpired, Clottey stepped into the ring on 19th Dec and he earned a TKO over the much younger 26year old in the 6th round of a 10 rounder.

Now here is something that may shock a few people.

He wrote back: “I am fine, I even played soccer this morning”.

Crazy stuff! Who has a professional boxing match on one night and plays a football match the next morning? Well, that is Joshua Clottey.

He reckons he is quite a good footballer too.

According to Clottey, he only said the media had written a lot about him so now that he had won he was expecting them to ask him to keep fighting, at least to congratulate him on his very convincing  win. After a series of some well calculated hefty shots to Mfaume’s body, the Tanzanian had retired on his stool.

In a way he was “retiring” and was waiting for the media people to tell him to come out of “retirement”.

He was giving members of the media and the public the chance of a “referendum” on his future in the sport.  I would call it tongue in cheek, mischief.

When asked about a potential  fight with Saul Alvarez which had looked so close (it was as good as a done deal  in 2014 but which  never actually materialised ), Clottey revealed he had already been  given $40,000 as training fee. However, according to him, Alvarez’s camp went a bit cold on the fight and claimed their fighter had sustained an ankle injury.

Clottey however refuses to accept it as genuine, as he claims, the Alvarez camp may have heard about how hard he was working the punch bags after he had been visited by HBO during one of his training sessions and felt his style would be a problem for Alvarez.   In his own words, they “chickened out”. He was gutted because he felt that was his chance to redeem himself after the flak he had taken after that high profile fight with Paquiao back on 13th March, 2010.

Clottey also had a few words for current IBF lightweight champion, Richard Commey. He feels, it may be too soon for Commey to take on Lomachenko as Ukrainian is “too crafty”.

On the upcoming rematch between Ghana’s former WBO Sper Bantamweight Champion, Isaac Dogboe and Navarrete of Mexico, for the Royal Storm to triumph over the Mexican, he would need to work on his defence.

When Clottey was asked if he honestly felt he could become a world champion again and at which weight division, the man nicknamed the GRANDMASTER and The Hitter was emphatic when he said, “Let me tell you the Gospel truth, listen, if they give me a chance now, to fight with those guys out there at 154, I tell you what, I have that shot, I have that desire in me, if I fought like my last fight,I can prove it and become a Champion”

He went on;  “If I don’t  get that chance today, I am very very happy in my life”. He certainly appreciates what the sport has done for him.”

Very nice one there.

Joshua Clottey has an enviable record:

Three of the five losses were against boxers I would call “Hall of Fame fighters”: PACQUIAO, COTTO AND MARGARITO.  He even disputes the official result of a loss (Split decision) against Miguel Cotto.