Nkrumah interchange, other parts of Accra flooded after heavy rain 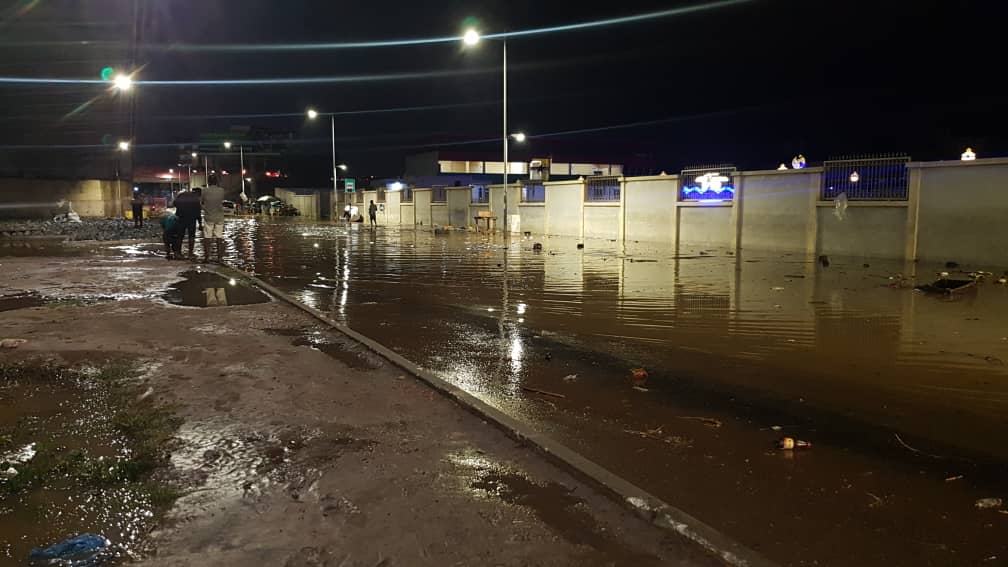 Some parts of the capital city got flooded after a downpour on Sunday evening.

Some places including the Kwame Nkrumah Interchange, Kanashie, Avenor among others were all flooded.

Running water spilled from chocked drains unto the roads at the Kwame Nkrumah Interchange and left pedestrians with no choice but to walk through the water which was around the knee level.

Circle de3 if I pee for the there sef the whole place fit flood pic.twitter.com/9OxZsU2zFF

Scores of vehicles were trapped in the water.

Commercial and private drivers had to take a detour as the side of the Interchange that leads to the Ring road was almost cut off due to the rain.

A young man believed to be in his 30s was found dead at Awudome in Accra after Sunday evening’s downpour.

An official of the urban search and rescue team of the National Disaster Management Organization on patrol duties told Citi News that they found the lifeless body near a drain in the area.

The Ambulance service and the Police arrived at the scene a few minutes after the body was found and conveyed the remains to the morgue.

A resident in the area said the deceased was earlier seen directing traffic.

“I know him within the vicinity. He is popularly known as Kweku Bonsam. He was directing traffic just around the roundabout because of the water situation there. We believe maybe he had taken alcohol beyond his limit and as such was carried by the water to this point [where he was found dead].”

Speaking to Citi News, the Greater Accra Director of NADMO, Archbald Cobbinah said they responded to the distress call after they were called upon by the residents.

He described the incident as an unfortunate one.

“It is an unfortunate situation. Our heart goes out to the family of the deceased. The police have come for the body.”

A few nights ago, a downpour wreaked havoc in parts of the country, injuring some people and destroying properties.

The Accra Metropolitan Assembly has already begun desilting storm drains ahead of the rainy season to prevent flooding.

As the rainy season approaches, many Ghanaians and most residents in Accra worry about flooding in the city.