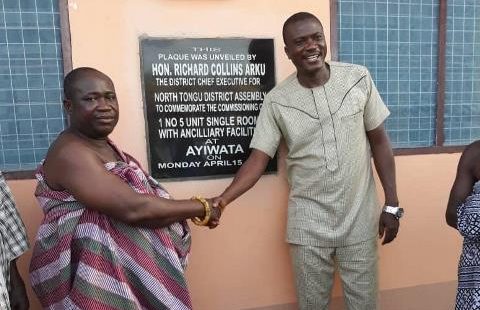 Richard Collins Arku, North Tongu District Chief Executive (DCE), has strongly condemned what he calls the physical and verbal assault of teachers by some community members describing it as “improper, callous, and backward”.

He called on residents to end the practice, saying it undermines education in the community.

[contextly_sidebar id=”96P7D88MxinfTudmNrRDg6WFTIeTx1Nm”]Mr Arku said this while commissioning a five-unit single room teachers’ residential block with ancillary facilities, including kitchens and porches, for the Ayiwata Basic School on Monday at Ayiwata, a deprived farming community in the district.

The facility, built by the District Assembly from its District Development Fund (DDF), also has a three-unit detached bathroom and a two-unit place of convenience.

The DCE said teachers as role models were important assets to help mould children for the future and should, therefore, be motivated to give out their best, “but some parents instead attack them”.

Mr. Arku entreated all communities to avoid the practice and directed them to refer any anti-teacher sentiments to school management teams, the Education Directorate or the Assembly or else they will lose their teachers and no other will accept postings there.

Mr. Arku said the facility will ease challenges facing teachers of the school and expressed the hope that it would also stop the chronic absenteeism.

“The issue of teachers residing in towns several kilometres away due to lack of residential accommodation here, resulting in them frequently absenting from school, in rainy seasons particularly, will now be a thing of the past,” he said.

Mr. Arku noted that teaching and learning would also increase and appealed to the community, parents and pupils to collaborate with the teachers for improved academic fortunes of the pupils.

He promised to get a water tank supplied for rainwater harvesting for the school, as well as consider completing a CHPs Compound project in the town to bring health care nearer to the community.

Government, he said was on course in meeting its obligations in the supply of social needs of communities, and urged communities to play their sides of the role well for the expected development impact.