Rawlings to Gov’t: ‘Thank you but don’t rename UDS after me’ 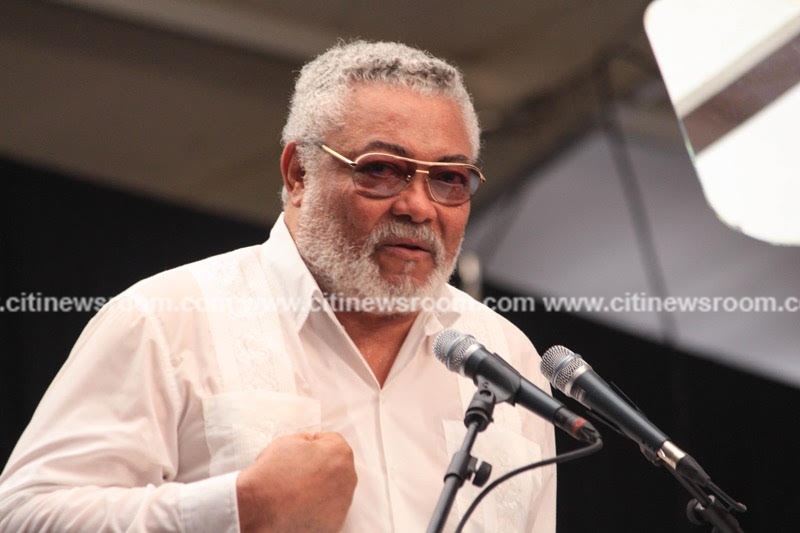 Former President, Jerry John Rawlings is asking the Ministry of Education to remove the clause that seeks to rename the University of Development Studies (UDS) in his honour from the new University Bill.

In a statement posted on his Facebook page, Rawlings reiterated his earlier position with which he turned down a similar request two years ago.

According to the founder of the UDS, he does not want the institution to be renamed after him because of his principle not to have any monument named for him.

Mr. Rawlings, therefore, wants the Education Minister to without delay, withdraw that aspect of the Bill before it is laid before Parliament.

“When the proposal for the naming of the UDS was first brought to the former President’s attention by the Education Minister in 2017, he thanked the President and the government for the honour, but politely declined the offer because he had a long-standing principle not to have national monuments and facilities named after him.”

“The former President has since the publication of the details of the new Bill to be tabled to Parliament written to the Minister of Education to reiterate his position and kindly requested that the re-naming of UDS after him be withdrawn from the Draft Bill to be submitted to Parliament”, the post added. 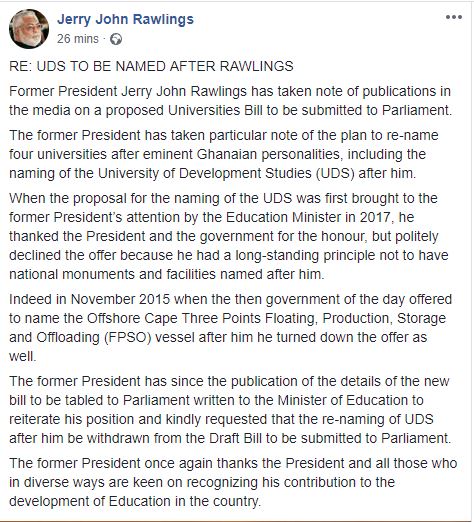 There have been attempts by previous governments to name some national monuments after the First President of the fourth Republic without success.

Despite this, a popular spot in the central business district of Accra has his name around it as the Rawlings Circle.

In 2015, when his own party, the National Democratic Congress (NDC) decided to name the Offshore Cape Three Points Floating, Production, Storage and Offloading (FPSO) after him, Mr. Rawling rejected the offer.

Four public universities in the country will be renamed after the newly drafted Public University Bill is adopted and passed by Parliament without any amendments.

It is expected that the University of Development Studies will be renamed after the first President under the Fourth Republic, Jerry John Rawlings.

The University of Professional Studies, Accra will be renamed after its founder, Nana Opoku Ampomah.

A former member of the United Gold Coast Convention (UGCC) and Convention People’s Party (CPP) will be honoured with University of Health and Allied Sciences while the University of Energy and Natural Resources is to be named in honour of former Prime Minister of Ghana, Kofi Abrefa Busia.

He has also announced that the Wa Polytechnic will be named after Ghana’s former President, Dr. Hilla Liman.