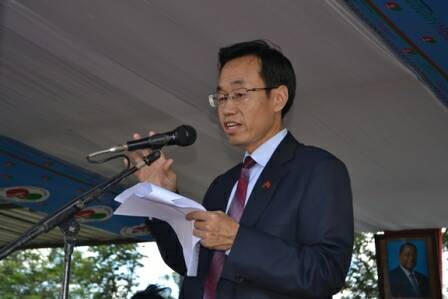 The Chinese Ambassador to Ghana says the Chinese government is ready to work with the government of Ghana in the fight against illegal small scale mining popularly known as “galamsey”.

According to Shi Ting Wang, the Chinese Ambassador, they are ready to work together to find the root cause of galamsey, adding that although the issues seem quite complicated a solution could still be found.

“We are always ready to work together with the Ghanaian government to stop galamsey,” the Chinese Ambassador added.

Speaking at a lecture series organized by the Confucius Institute at the University of Cape Coast, Ambassador Shi Ting Wang explained that the local people are the ones who help these Chinese nationals engage in activities of illegal mining.

He added that without the support of the local people these Chinese nationals cannot engage in galamsey themselves.

He, however, called for collaboration between the two countries to help stop illegal mining.

“We want to work together to help stop this illegal mining,” Ambassador Shi Ting Wang stated.