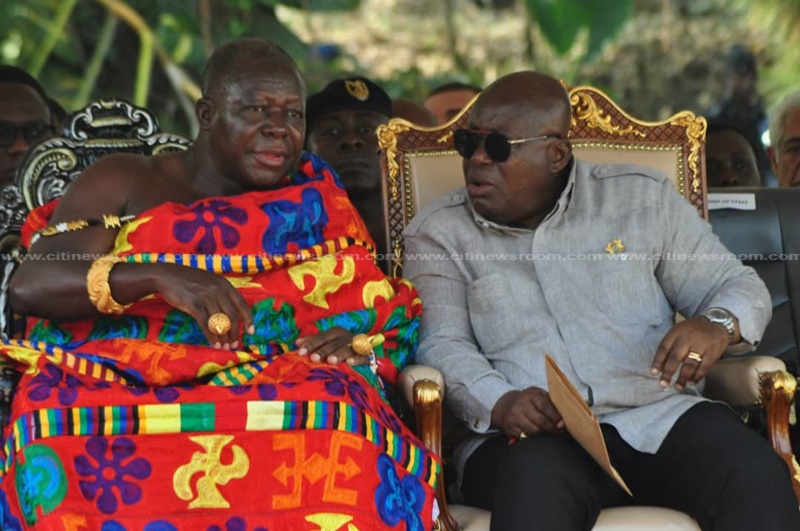 The President says the leadership being displayed by the Otumfuo since he was enstooled as the Asanthene has not benefitted only the Asante kingdom, but the country as a whole.

Speaking at the 5th Akwasidaekese to commemorate the 20th anniversary of the Asantehene on his ascension on the golden stool on Sunday, Nana Addo prayed for long life and wisdom for the Asantehene.

“We congratulate the Asantehene on his 20th anniversary celebration. Your contributoionn since you ascended the throne has really revamped the country’s socio-economic development. The unity and peace being enjoyed in Ghana are as a result of your good works. Not too long ago, you led the committee of eminent chiefs to resolve the long-standing dispute in Dagbon. It is for the reason that many have traveled far and near to extend a hearty congratulations to you. We ask for God’s blessing to give you an additional 20 years to your ruling so you continue assisting the country and the people of the Ashanti Kingdom.”

The Asantehene-led three eminent Kings mediated the chieftaincy dispute between the Abudus and Andanis in Dagbon and came out with the final road-map that led to the enskinnment of the New Yaa-Naa.

There was a rich display of culture in the Ashanti Regional capital, Kumasi as the Asantehene Otumfuo Osei Tutu II celebrates the ‘Akwasidaekese’ as part of his 20th anniversary on the golden stool.

Major roads and principal streets within the metropolis have been blocked to traffic as local and foreign dignitaries attended the occasion at the Manhyia Palace with heavy security.

Former President Jerry John Rawlings has paid glowing tribute to the memory of the Asantehene, Otumfuo Osei Tutu II as the latter marks two decades since his ascendancy to the Asanteman throne.

He lauded the Asantehene for his efforts towards addressing land-related problems in Asanteman and promotion of education in Asanteman.

He said Otumfuo Osei Tutu II has on various occasions helped to resolve complex chieftaincy disputes including recently the several years old Dagbon crisis which paved the way for the enskinment of the new Yaa Naa.

“His Majesty’s recent historic visit to Kyebi and an earlier hosting of the Okyehene in spite of the traditional rivalry between the two kingdoms was yet again a great exhibition of his dynamism and desire to spread the spirit of unity and the spirit of one Ghana,” Rawlings noted.

In the Facebook post, he stressed that Otumfuo’s reign as Asantehene has elevated the image of Asanteman and brought “a refreshing new aura to the institution of chieftaincy in Ghana.”