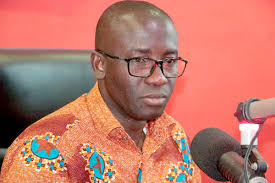 The District Chief Executive for the Amansie South District, Mr. William Bediako has warned that security agencies will deal ruthlessly with persons who want to cause instability in the area.

Mr. Bediako said he has submitted three applications for mining permits to the relevant regulatory bodies in Accra.

He added that, once the mining permits are approved, the youth of the various communities within the district will have the leeway to go back to engage in responsible mining.

“So the youth should calm down, the Government will not deprive them of their daily bread, this is why as a Chief Executive, I submitted 3 applications on community Mining to Accra, when it is approved we have every leeway to do responsible mining. That is the interest of the President. So no one should try to stampede Gov’t into kowtowing … We will not allow that.”

His comments come after six persons including a police officer sustained injuries when some irate youth in the area clashed with the police over the activities of a mining company in the area.

Mr. William Bediako also disclosed that Benviko Mining Company Limited, the mining firm at the centre of the issue had temporarily suspended its operations following the impasse.

A violent confrontation between a Police patrol team of the Ashanti Regional Police Command and angry youth at Manso Tontokrom, in the Amansie South District on Thursday left one policeman injured and five residents with gunshot wounds.

Lance Corporal Samuel Kugyenu of the police SWAT Unit was injured while the police vehicle which conveyed them to the location was also damaged.

The police team went to the community to execute a court warrant issued by the Bekwai Circuit Court for some suspects linked to recent damage to property and the theft of some pump action guns, belonging to Benviko Company Limited, a mining company.

This was in a news release signed by Assistant Superintendent of Police Godwin Ahianyor, Public Affairs Officer of the Ashanti Regional Command and copied to the media.