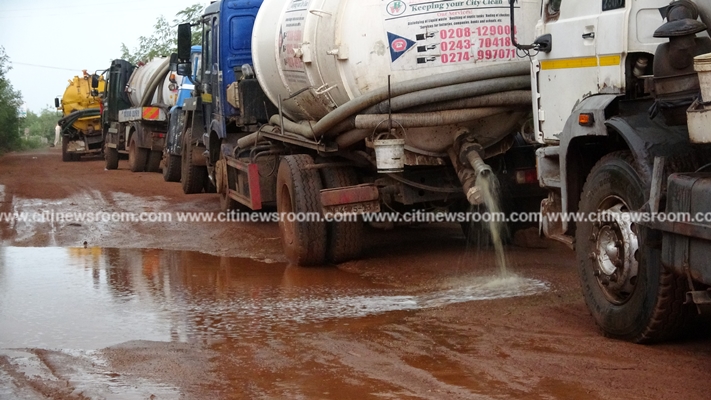 The Ghana Police Service has indicated that it will soon make charges against 78 liquid waste truck drivers who dumped faecal matter on a road during a protest on  Thursday.

The drivers were demonstrating to demand the opening of the Nungua Farms Liquid waste dump site to enable them to dislodge faecal matter after being shut down 4 days ago.

They were arrested for offloading faecal matter on the road and adjoining bushes after they were denied entry.

[contextly_sidebar id=”3NX2uiPWr2t47UQ0bdgTgoiAqiWeOMYG”]Speaking to Citi News, the Public Relations Officer of the Greater Accra Regional Police Command, DSP Afia Tenge, said the drivers will be made to face the law.

“Since their arrest, they were placed in police custody to assist in investigations. All the relevant laws that may be applied to their action will be appropriately pr0ffered against them. We all know that what they did yesterday was so inhumane and an affront to the law to have even discharged faecal matter on the streets; the gross disregard of the health issues and all that. So we may be looking into it properly to see the appropriate charges the police can bring against their action.”

The Greater Accra Regional operations Commander of Police, ACP Kwesi Ofori in an earlier interview with Citi News after the arrests explained that the arrested truck drivers were engaging in activities that contravened public safety and security.

“Following directives from the Tema Municipal Assembly, for formal closure of the toilet dumping ground at the animal husbandry area, the operators and drivers decided not to heed to the assembly’s directive. The assembly made it known to them that where they are dumping openly is against public safety and security of the people and for that matter the city. Without recourse to the public order law, they took the law upon themselves, came here, blocked the road, made it unmotorable, and dumped some of the human waste on the road,” ACP Kwesi Ofori said.

He also cautioned the other truck operatives to abide by the laws of the country.

“We will like to warn the operators, drivers and their associates that we are in a democratic country and orders of the assembly and laws must be respected. They cannot take the laws upon themselves and do whatever they want.”