Portland Trail Blazers center Enes Kanter is the only Turkish player with a significant role in the NBA playoffs, but fans in his home country can’t see much news about him.

Kanter is a wanted man in Turkey for his allegiance to Fethullah Gulen, a Muslim cleric and conservative political figure the government accuses of orchestrating a failed coup in 2016, and he’s been scrubbed from the country’s airwaves and Internet.

And as the Blazers continue their postseason, the NBA has avoided mentioning Kanter on Turkish social media accounts even as he plays a pivotal role in their playoff push.

Kanter scored 26 points and grabbed seven rebounds in Portland’s loss to the Denver Nuggets in Game 1 of the Western Conference semifinals, then had 15 points and nine rebounds in a Game 2 win. But the league’s Turkish Twitter account did not post any of his statistics or highlights.

Instead, the account copied and translated the texts and images from a tweet from the NBA’s main account, but removed any reference to Kanter, who led the team in scoring in Game 2. 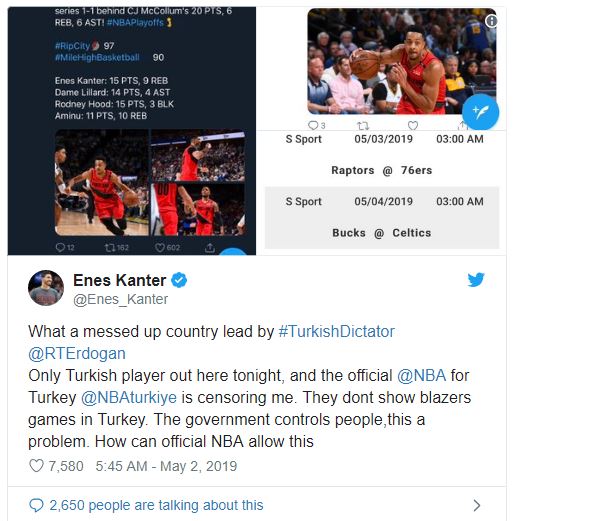 Kanter, 26, has emerged as one of Erdogan’s top critics. The eight-year NBA veteran refers to the president as a dictator and called him “the Hitler of our century.” In turn, Erdogan asked international law enforcement agencies in January to detain Kanter and remand him to Turkish authorities. Turkish media hardly ever mentions Kanter, but when it does, he’s called a terrorist and traitor. Praise of Kanter is enough to land Turkish nationals in deep trouble.

“Whoever runs the official account, NBA Turkey, lives in Turkey. Look how sad this is, they can’t even put my name out there because they’re scared,” Kanter said in a phone interview. “They know if they put my name out there, they could get in trouble or they might even end up in jail.

“That shows it’s a dictatorship. That shows there’s no freedom of speech in Turkey. It’s crazy. Basketball reporters in Turkey cannot even say my name because they will all be in trouble.”

Mark Tatum, the NBA’s deputy commissioner and chief operating officer, said the account was managed by a local vendor and the league is terminating the relationship.

Commissioner Adam Silver has also voiced support for Kanter’s political activism. Before Kanter joined Portland via a midseason trade, he played for the New York Knicks, who played the Washington Wizards in London in January. Kanter chose not to travel with the team for fear of arrest or assassination by Turkish agents. Silver stood by Kanter’s decision.

“There is nothing more important to me as the commissioner of the league than the security and safety of our players,” Silver said then. “We take seriously the threats that he’s received, even if it’s just people on social media. I support Enes as a player in this league and I support the platform that players have to speak out on issues.”

This was not the first time the NBA omitted Kanter from its social media accounts. In December, the NBA Europe Instagram account posted an image and asked users to name the best active Turkish player, but mentioned only Cedi Osman, Furkan Korkmaz and Ersan Ilyasova.

Silver called Kanter after the post was published, and promised that he was left out in error and it would never happen again. The account immediately posted a new image that included Kanter.

But even innocent mistakes from outlets like the NBA matter in Turkey’s altered media environment, said Soner Capagtay, director of the Turkish research program at the Washington Institute for Near East Policy. Erdogan’s government has altered what was once a vibrant and competitive news industry, forcing Turks to turn to foreign news outlets and social media for reliable information.

“They’ve become the go-to place given Erdogan’s distortion of the media,” Capagtay said.

Capagtay feels that accounts lose credibility when they adhere to government narratives. He said it makes determining real news from regime spin even more difficult since the independent press that is able to filter into Turkey, the world’s leading jailer of journalists, is largely controlled by foreign entities, mostly in Russia and Saudi Arabia.

That news still carries a perceptible slant, though, and doesn’t mention Kanter. He said if he controlled the NBA’s social media accounts, he’d hand them over to someone who isn’t afraid of a dictator.

Ladies, 6 signs you shouldn’t marry him

Ladies, 6 signs you shouldn't marry him