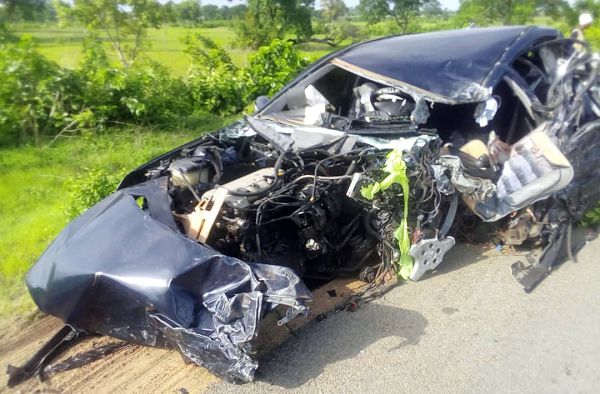 The driver of the Mercedes Benz saloon car that collided with a Nissan Patrol Vehicle carrying four Municipal and District Chief Executives (MDCEs) in the Northern Region on Monday, June 24, 2019, has died.

Zakaria Karim, 32, died at the Tamale Teaching Hospital in the late hours of Monday.

He had sustained multiple injuries on the head and both legs in the accident.

The Head of the Accident and Emergency Department at the hospital, Dr Godfred Takye confirmed Karim’s death to newsmen in Tamale Wednesday.

The deceased was travelling from Accra to Tamale when the accident occurred at Zanzugu Yipala village on the Tamale-Kintampo highway.

Dr Takye said the MCEs for Nanumba North and Gushegu, Abdulai Yaquob and Issah Musah respectively have also been discharged.

Dr. Takye indicated that the Mion DCE, Abdallah Hashim, complained on Tuesday about some chest pains and therefore, detained him for further medical examination while the Zabzugu DCE was still on admission at the intensive care unit, adding that the condition of the Zabzugu DCE has also been stabilized but he is under further observation because of the serious nature of the injuries he sustained.