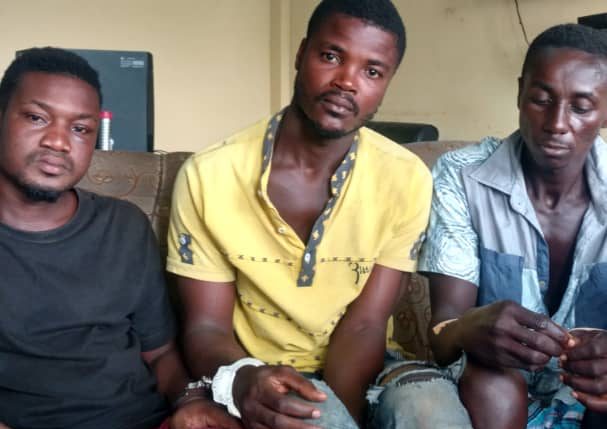 The Koforidua Circuit Court B has remanded into prison custody the three suspected kidnappers who were arrested for robbing a traditional priest at Teye Nkwanta near Okorase in the Eastern Region.

They were part of an eight-member gang said to have attacked the house of the priest, broke the sliding doors to his room, and robbed him of some personal properties.

DSP Ebenezer Tetteh,  the Eastern Regional Police Public Relations in an interview with Citi News indicated that the court’s move will assist the police in their investigations to apprehend the other five suspects who are currently on the run.

“We have remanded the three suspects who were arrested in connection with the kidnapping, robbery, causing unlawful damage and assualt in Koforidua last week. They were put before a Koforidua Circuit Court B and their pleas were not taken. They have been remanded into prison custody to reappear on the 6th of July. This is to enable us get the other suspects who are on the run”.

The suspects were part of a gang of eight that attacked a house belonging to a traditional priest in the area, took away a taxi cab, TV sets, sound systems and GHc14,000 and in the process kidnapped two members of the household.

Police and a team from the Eastern Regional Counter Terrorism Unit with the help of townsfolk at Ayisikrom in a rescue operation managed to rescue the two victims and in the process arrested three of the kidnappers in a forest near Ayisikrom.

Police said the priest, Emmanuel Sarpong, reported that his wife had been attacked by eight men armed with cutlasses and other weapons.

After the arrest, the suspects led Police to an uncompleted building on the outskirt of Ayisikrom where all the items stolen from the house of the complainant were retrieved.