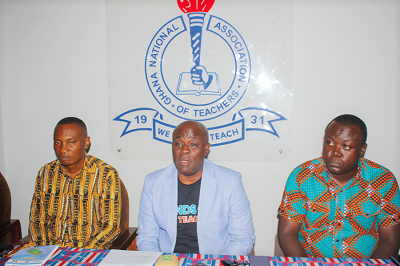 Three teacher unions have threatened to withdraw their services from the beginning of the next academic year for deductions made from their salaries under a supposedly unsolicited insurance policy.

The three unions said although most of the teachers had objected to the Ghana Education Service (GES)-SICLife Insurance Policy, blanket deductions had affected the salaries of all GES workers without their consent.

They have consequently described the situation as unacceptable.

“We are asking the GES to stop the deductions by the end of August and refund all amounts of money deducted from teachers till date to them. If at the end of August these deductions have not ceased and the money deducted refunded to our members, we shall withdraw our services from September 1, 2019,” the General Secretary of the Ghana National Association of Teachers (GNAT), Mr David Ofori Acheampong, said at a joint news conference in Accra yesterday.

The news conference was organised by the GNAT, Coalition of Concerned Teachers (CCT) and the National Association of Graduate Teachers (NAGRAT).

Under the policy, between GH¢9,000 and GH¢18,000 will be paid out to a member who suffers critical illness, including cancers, heart attack, kidney failure, loss of sight, stroke and permanent disability sustained as a result of an accident or an illness.

However, deductions of GH¢10 each made from the salaries of all GES workers, apparently without their consent, in June 2018 led to agitations which forced the suspension of the scheme.

Subsequently, a lot of teachers opted out and their money was refunded to them with an assurance from the GES that sensitisation would be done to implement the policy in April this year.

“So far as we the teacher unions are concerned, there was no sensitisation done anywhere even at the end of April.

It is, therefore, surprising that just this morning, we have received a lot of reports coming from across the country from our members that almost every teacher, including those who have exited previously, have been re-enrolled onto the GES-SICLife policy, while they have not committed themselves to it,” Mr Acheampong said.

“We have had a lengthy discussion with GES on this particular matter.

But it looks as if the GES is doing what they think is right.

So far as we are concerned, this is an optional policy and people must sign onto it willingly,” he added.

He noted that the move was a sign of gross disrespect for teachers and cautioned the GES to put it on hold with immediate effect.

Mr Acheampong said both teaching and non-teaching staff had been deducted GH¢10 each in the month of July.

“This means that they are not taking our advice; they are bent on implementing the policy whether we like it or not.

If they do not stop it, we will lay down our tools from September,” he warned.