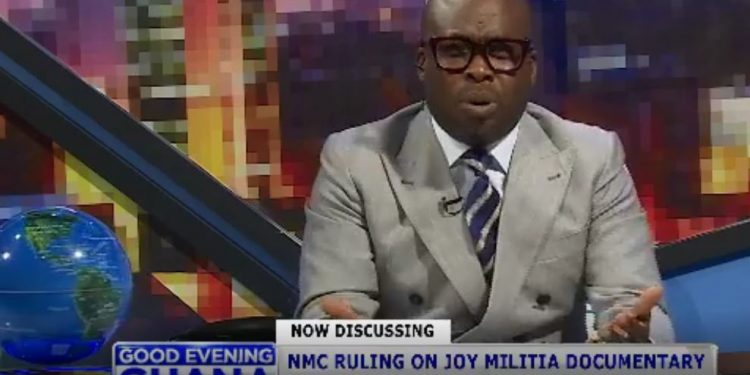 Outspoken Journalist and a PR practitioner, Paul Adom Otchere, has for the second time descended heavily on Multimedia Group’s Joy FM following their reaction to the National Media Commission’s ruling on the controversial ‘Militia in the Heart of the nation’ documentary.

The documentary captures a group of young men and women in a meeting at the Christiansburg Castle at Osu, the former seat of government. Joy FM’s Manasseh Azure Awuni among other things stated that the group was affiliated to the NPP, and that, although it was not a registered private security firm, attempts by the National Security to evict them in the past were unsuccessful.

Mr. Azure Awuni also stated that the group had the support of a higher hand in government, especially when one of its commanders was heard in a meeting telling the members that the President was aware of their activities.

The Host of Good Evening Ghana on Metro TV, who in March 2019, described the documentary as “sensational, disingenuous and bad journalism” in the Editorial segment of his show, is angry with Joy FM’s reaction to the National Media Commission’s ruling on the documentary.

Mr. Adom Otchere is particularly livid over the attempt by some employees of Joy FM to denigrate the credibility of the National Media Commission Chairman, Yaw Boadu Ayeboafo, by suggesting that once he was made a member of the NMC by the President before he became Chairman, there was no way the ruling would be fair.

Coincidentally, the NMC also described the documentary as “sensational and misleading”, following a petition filed against Joy FM by the Minister of Information, Kojo Oppong Nkrumah, on behalf of the government.

Portions of the NMC’s report read “In the end, the Commission found out that the attempt to expose the fact that the group operated from the Castle was in the public interest. However, in the attempt, the investigation had not been consistent in following the ethical standards defined by the Ghana Journalists Association code of ethics, particularly guideline 23, which states that “a journalist ensures that photographs and multimedia content adequately reflect an event and do not highlight an incidence out of context’’.

“The Commission concluded that there was no predisposition to violence in the documentary. Therefore, the association of the D-Eye Group with the Ayawaso West Wuogon Violence and the BBC story from Nigeria were sensational,” the NMC said.

Joy FM, including its journalist, Manasseh Azure Awuni, has questioned portions of the NMC ruling which they say focuses more on what errors may have been committed in the reportage, without emphasizing the government’s complicity in allowing the group to operate at the Castle.

It would be recalled that before the NMC heard the petition, the Multimedia Group objected to the presence of the NMC Chairman, Yaw Boadu Ayeboafo on the case, by virtue of his appointment to the Commission as a member by the Prescient, to be sitting on a case that involves the government.

Government on the other hand requested that the Ghana Journalists’ Association, GJA President, Roland Affail Monney, who’s a member of the NMC, recuses himself for some comments he had made earlier commending the work done by Manasseh Azure.

But in the end, both arguments were shot down and the two men stayed.

While commending the Information Minister, Kojo Oppong Nkrumah for courageously petitioning the NMC on behalf of government against his former employees, Mr. Adom Otchere demanded evidence for the NMC’s claim that the Multimedia Group publicly apologized to the President for linking him to the De-Eye group.

Although he agrees with the NMC’s ruling on the documentary, Mr. Adom Otchere also pointed out that the NMC may not have done a conclusive work on the contentious claim that the De-Eye group were still operating at the castle at the time the documentary was aired.

The Good Evening Ghana Host in referencing a Facebook post made by an unnamed senior journalist at Joy FM, said it was “crass, ignorant, disingenuous and unfair” for him to have denigrated the NMC Chairman, Yaw Boadu Ayeboafo.

“How can you denigrate such a person of many years’ experience? Is this what journalism has become? And this is coming from a senior person, and that’s why I say this is tabloid journalism? It is like serial caller journalism” Mr. Adom Otchere said.

Mr. Adom Otchere also condemned Joy FM’s reaction to the National Media Commission’s ruling through a social media campaign with the tagline ‘We are Joy’.

“Joy FM people say that they don’t care about the NMC ruling so they put something up to say we are joy, we are happy, we’re excited, we are going to heaven and we don’t care what the NMC says. How can you put up this in response to an NMC report that says you’ve engaged in unethical business as journalists? How can responsible journalists even do that? Do they even understand the role of the media as the fourth estate of the realm?

“We had seen this coming a long time ago. We think that the people at Joy FM should have a look at this critically, and have a think about fidelity to the professional standards. Journalists are not gods and that the freedom guaranteed journalists in the constitution have a limitation” he admonished.

Holding Joy to the highest standards

Mr. Adom Otchere said as long as Joy FM touts its pedigree and credibility in the media landscape, they must stick to the highest standards.

“We’re worried about Joy FM because Joy FM historically has over the years built a pedigree. When a company builds a pedigree like that; Joy FM may be owned by one person or a few people commercially, that’s their property. But what Joy FM represents in the national psyche at this time is pedigree and credibility. The possibility that a reasonable person will believe what he or she hears on Joy FM is high. As we say, Joy FM has a high believability quotient; and because of this; it behooves on the people there to keep the standards very high”.

Mr. Adom Otchere made reference to how Boris Johnson, UK’s new Prime Minister, who once practiced as a journalist was sacked for the Times Newspaper in London for wrongly attributing a quote to someone.

“He [Boris Johnson] had graduated from Oxford so he was an intellectual. He was fired from the Times because the Times wanted to keep their credibility. Over the years Joy FM has had a certain pedigree and they’ve become part of the society. Most of the things that are aired from Joy FM are believable. So when journalists who have inherited the pedigree; I insist on the word inherited because Joy FM’s pedigree is from 1995; and they’ve done some things consistently, so people who have inherited the pedigree and come and write these things, then the bosses at Joy FM should be worried” he noted.

The veteran journalist also expressed concern about journalistic standards in the country, with a call on practitioners to be guided by the code of ethics and do better.

“Journalism I thought was an intellectual exercise. Journalism is not about catching people. And these days you find a lot of that. Journalists have recorders in their pockets, in their hands, their back and everywhere. One of the things that worries me a lot as a journalist is when I am doing a story and the person says Paul I hope you’re not recording me. It irks me more than anything else. I get so brutally offended because I have never recorded anyone without their knowledge before; that’s not journalism; that’s not the journalism we were thought; but that’s the journalism of today.”

“What am I recording for? You have to look at a document and see if there are contradictions; you have to analyze the document with the knowledge that you have. That’s what journalism is about. It’s not about catching people. You’re not a police officer. And it’s that kind of journalism and narrative that lacks credibility that will become sensational. That’s the one the NMC will call sensational because it lacks credibility. When a narrative lacks credibility and that narrative is looking for attention, it will do things that will make it unethical, and the narratives will do things that will make it sensational. That’s what the NMC is saying” he concluded.