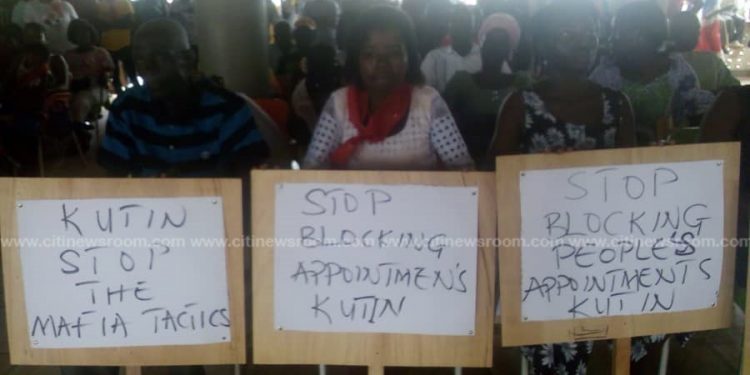 Supporters of the governing New Patriotic Party (NPP) in the Central Region have demonstrated against their Regional Chairman.

They accuse Chairman Robert Kutin of taking some unfair decisions against some executives of the party in the region.

According to the angry demonstrators, Chairman Kutin is the reason for the cracks in the party in the region.

They added that the party may lose the 2020 elections if chairman Kutin does not resign.

Some angry demonstrators who spoke to Citi News on Thursday indicated that, suspended Vice Chairman of the party, Ekow Horace Ewudzi must be reinstated if the party wants to win the 2020 elections.

“They must reinstate Ekow Horace Awudzi if they want to win the general elections,” an angry demonstrator told Citi News.

Amos Nyarko, Youth Wing Chairman of the NPP in Abura Asebu Kwamankwse explained that Article 11 clauses 44 of the party constitution clearly spells out the procedures for removing an elected member adding that nowhere in the constitution is a Regional Chairman empowered to suspend a colleague regional executive member without recourse to disciplinary procedures of the party.

“It is not written anywhere in our constitution that the chairman can remove his Ist Vice-Chairman,” the angry youth wing chairman of Abura Asebu Kwamankese said.

“After today’s demonstration, we are heading to party headquarters to petition President Akufo-Addo over the matter,” he said.

In a related development, dozens of NPP supporters from the Central Region on Thursday besieged the party’s Headquarters in Accra, to present a petition to seek to overturn the suspension of the Region’s 1st Vice-chairman, Horace Ekow Ewusi.

The supporters drawn from the 23 constituencies of the region, accused the party’s Regional Chairman, Mr. Robert Kutin of hiding behind a faceless petitioner, Edward Okraku Adum, to suspend the 1st Vice-chairman, who he considers a threat to his chairmanship position.

Ekow Ewusi was suspended on Monday, by the NPP Central Regional Chairman, after he refused to respond to a petition accusing him of engaging in criminal acts including drug peddling, escaping from prison in the UK, as well as illegally auctioning seized excavators from mining sites.

Mr. Ekow Ewusi has in the past week been at the centre of controversy following a petition filed against him by one Kraku Adum.

Adum, who reportedly served a jail term at the HMP Ford Prison in the United Kingdom for drug trafficking demanded the head of Ekow Ewusi accusing him if being unfit to occupy the First Vice-Chair position of the elephant family in the Central Region.

In his petition addressed to the National Security Minister, Albert Kan-Dapaah, and copied President Nana Addo Dankwa Akufo-Addo, the UK High Commissioner to Ghana, National Chairman of the NPP, Freddy Blay, and the Central Regional Chairman of the party, Robert Kutin, Adum called for the immediate removal of Mr. Ewusi from office.

He demanded that Mr. Ekow Ewusi, who is a member of the Inter-Ministerial Committee on illegal mining be probed, prosecuted and jailed if found culpable.