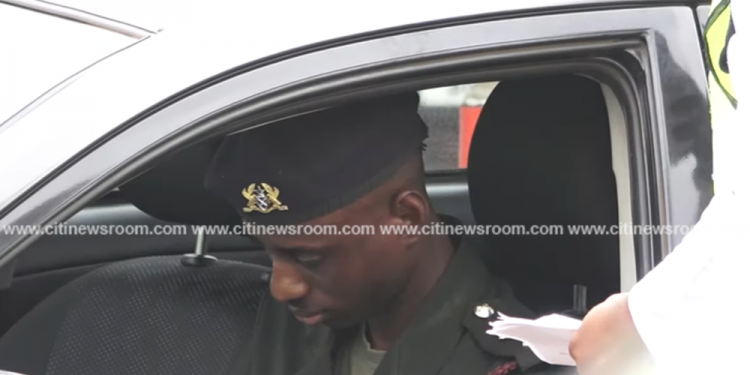 These are the words of the General Manager of Citi TV and Citi FM, who hosts the Citi Breakfast Show, and by the way is Ghana’s reigning Journalist of the Year, Bernardino Koku Avle.

He made these comments on the show, on June 4, 2019 during one of the earlier on-air campaigns of Citi TV’s War Against Indiscipline. Ostensibly, his pronouncements were a charge to the Ghana Police Service to be up and doing in restoring order on our roads.

He said more than this actually. He added these too…

‘The Ghana Police must rise and work. That’s why they are there. Whatever they are afraid of…why? Whether you are afraid or not, you will die! Do the work! Go to the town! Stop the people! Enforce the law! Let them sack you! Go home go and farm, it doesn’t matter. You think if I was afraid to be sacked, I will say the things I am saying here?… We should stop the cowardice and do our work. Ghana Police stop allowing people to be undisciplined on our streets, it’s not good. It’s a disgrace. I will say it till you get tired’

Let’s end it here, though there is much more, and I am not tired of sharing them with you.

Thankfully, the Ghana Police has risen up. They have been in the town in partnership with Citi TV. And gradually we are restoring order on our roads. Beyond the actual operation, the Police administration has procured two vehicles just for the War Against Indiscipline campaign. How commendable!

Now someone I know sent a message to one of my colleagues telling him how he no longer drives his car. Instead, he joins a trotro to and fro for fear he will be nabbed by the War Against Indiscipline team. He doesn’t have a license apparently!

That’s just how much of an impact the campaign has made. Like they say, the leopard guards its territory with its aura. And yes, I should also tell you that a good number of my colleagues have had their licenses renewed with the speed of light since we started this campaign. So not only has the State made more than GhC258,000.00 from fines slapped on errant drivers so far, the DVLA too is raking in some good cash!

Nonetheless, there are still recalcitrant ones who haven’t heard yet, or simply are too habitual to quit even after an initial encounter with the WAI fever. Hajia of ‘I just overpass the trotro fame’ comes to mind.

The fact that reports of the arrests of the high and mighty like the driver of the Kade MP aka ‘fiiiiiim me, fiiiim me well’ aka ‘national interest’, that of ‘ascuse me’ and ‘Hello Mr. Eklu’ aka Deputy BOST MD, Moses Asem and many others everyday Ghanaians respected in their little circles went viral with many condemning the indiscipline of the culprits, points out one thing; we all, at least majority of us know the benefits of an orderly society and wish to have same.

Also, the fact that many of the culprits attempted to call highly placed people especially and worryingly, at the ‘Office of the President’ to plead on their behalf or order the Police around to release ‘their friends’ without knowing their offense, only speaks to how endemic the canker is.

It’s shameful to say the least that the Office appears nonchalant in redeeming its name as it would have in the least politically motivated allegation.

Away from the Office of the President, we are humans. Besides, those who have patented their indiscipline, holding on to it like a heirloom, there are those who genuinely falter simply because we are humans. That’s why arresting a few security officers at some of the locations wasn’t such a big deal.

But my heart was broken when at the East Legon tunnel, the WAI claws nabbed a strong network of men and women in uniform including a retired colonel, drill instructors (those who instruct soldiers at training), a police officer, immigration and customs officers and the almighty ‘Office of the President’ staff in uniform who have proven to wear indiscipline driving like a badge of honour. I think I have addressed them already.

The most shocking to me, was a young Lieutenant who fled arrest while in uniform just like the MP for Tarkwa Nsuaem George Mireku Duker did on the Spintex Road. Like Mr. Duker, the Lieutenant was given a hot chase and then eventually rounded up. Let me quickly add that the driver of black Toyota Land Cruiser GV 501-14 who eluded arrest on the Legon bypass has still not been fished out.

Back to the Lieutenant, when I saw his face, I was depressed. A young innocent looking handsome gentleman who I believe is a role model to many younger ones. ‘He will easily command the respect of his superiors,’ I thought to myself. His charisma alone will evoke a deep reverence in any stranger meeting him for the first time. Add the uniform to it and you have a ‘king already’.

The impunity with which he and his many other colleagues and superiors drove on the wrong side of the road to join in at the traffic light heading towards the tunnel was unbelievable to me. They essentially made everyone else following traffic rather look stupid by their act of ‘normalized stupidity.’

I believe without a shred of doubt, that the War Against Indiscipline campaign is doing more than just restoring order on our roads. It is also reinstating a near tattered image of the Ghana Police Service. Even though some say all these are just for the cameras.

Having been with them and some others, I believe in my heart that, we have men and women of integrity in the Service, if only its administration will not continually be politicized but allowed to be professional. We need to encourage our Police Officers when they do well, for others to emulate. And also put pressure on our leaders to enact laws that bar them from appointing the very next IGP and the others to follow.

That said, it will be tragic for the military especially, to desecrate their sacred uniform. The collateral damage to other security services will be irreparable.

Imagine immigration and customs officers jumping red lights or driving on the shoulders of the road just because they want to get to work earlier as it were ‘in the national interest’. Can we as citizens trust them to safeguard our boarders?

Lest I forget, the argument some make is that these security officers must be allowed to be undisciplined because of the nature of their work. Guess what was the excuse of the young Lieutenant? He was running late for a parade at 37. As if, his parade is more important than the one who has to cast the news at 6am. The nightmares one experiences because of the fear of being late for the 6am bulletin er, I can’t put them in writing enough.

But like him, the others; drill instructors, colonel etc all gave similar excuses that are at best, flimsy!

We bash the Police most because they are the ones we interact with often. Now the radar has been on the other officers too. From the little I have seen, I am not impressed. So dear military, customs, immigration and whatever you are, ‘you are not paid to wear uniform and collect salute’.

Also, your uniform doesn’t make you above us nor give you a certificate to be undisciplined. Rather, it is a unique privilege for you to serve the Coat of Arms, and our sacred colours which coincidentally remind you and us, civilians of the blood our forebears shed…

You may not have to shed your blood. But the last thing you want to do is to shed the honour of your lofty offices.

Let me end with a story I shared on #BackPage last week.

We only get to know of the location of an operation or exercise the night to it. So the day to our Adenta-Dodowa deployment, our head of TV, OJ as we call him, but known by his Ghana card as Richard Mensah called to inform me of our next location. I quickly called the driver and cameraman to let them both know about it.

We had to leave far earlier than usual because this time, we were going to work with a new set of Police officers and also it was Adenta!  So I called the cameraman, Ignatius Kwame Adzaho-Amenortor.

He was at the hospital by his father’s bed around 8:45pm. After informing him, he had to leave his sister by his father and then get home to prepare for what I call the Papacy’s Special Initiative, PSI. (WAI has thought me to always pray for the vision of my leaders to align with my passion, Samuel Atta Mensah is a visionary). I don’t even qualify to say that.

Back to the #WAI exercise. So early the next morning, Adjaho was at work as was the rest of us. While on the field, I observed him receiving calls and making same. I could imagine it was a tough one receiving updates on your ailing father’s situation and filming aggressive or embarrassed people who won’t spare a moment to attack you for filming their undisciplined conduct and their arrest on our roads.

The exercise was over. I was busy at the editing bench in the office with the video editor putting together a longer report for our major news bulletin on CitiTV, CitiNewsroom (CNR). We were about 90 per cent through when Adzaho came by. The bed by which he sat the night before has become his father’s death bed. He is gone!

So again, dear soldier man or whoever you are, no excuse is tenable for your undisciplined conduct on our roads. Not your parade nor your drills.

You have been for many of us the hall mark of discipline and honour over the years. You can’t fail us at this point like you did the last time at the East Legon tunnel. Your wanton display of indiscipline overwhelmed and shocked your police friends. Please, do us proud. Let’s War Against Indiscipline together. All of us!

The writer, Caleb Kudah is a news anchor and reporter on Citi FM, producer of the Citi Breakfast Show and host of Backpage, a news satirical show on CitiTV.

Amidu complaining too much, nobody is stopping his probe – Buabeng Asamoah

Amidu complaining too much, nobody is stopping his probe – Buabeng Asamoah