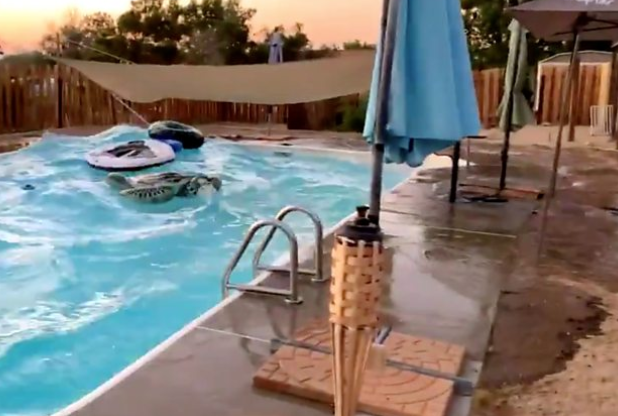 A 7.1 magnitude earthquake has rattled parts of Southern California, the biggest tremor to strike in 20 years.

It struck at the shallow depth of 0.9km (0.6 miles) and its epicentre was near the city of Ridgecrest, about 240km north-east of Los Angeles.

Seismologist Dr Lucy Jones said the quakes could continue. “This is an earthquake sequence,” she said at a press conference. “It will be ongoing.”

“Every earthquake makes another earthquake more likely,” she added, saying there was a 10% chance of a similar or even larger quake following in the next week.

However, Dr Jones said it was not likely the quake would trigger shocks on other fault lines.

The earthquake was felt as far away as Las Vegas in the neighbouring state of Nevada and over the border in Mexico.

California Governor Gavin Newsom offered his “heartfelt support” to all those affected, and has requested a Presidential Emergency Declaration and federal aid to help.

Fires have broken out and emergency services are responding to calls across the state after the quake.

“We’ve got fires, we’ve got gas leaks, we’ve got injuries, we’ve got people without power,” Ridgecrest Mayor Peggy Breeden told Reuters news agency. “We’re dealing with it as best we can.”

There have been no reports of serious injuries so far, Police chief Jed McLaughlin said at a press conference.

Officials said it was still unclear how much damage had been caused and how many people had been injured in the state.

Thursday’s event wrecked some homes in the region.

The Los Angeles Fire Department however said nobody had been killed or injured. A statement after the latest quake said the authorities had seen “no major infrastructure damage” after a survey of the city.

Crowds at a Los Angeles Dodgers baseball game were seen leaving their seats when the quake struck, although the players themselves continued playing.

In Las Vegas, a basketball match between the New York Knicks and the New Orleans Pelicans was abandoned because of the tremors.

In a tweet, LA Mayor Eric Garcetti said he was sending a task force to Kern County “to help with the damage closer to the epicenter”.

What do we know about the new quake?

After Thursday’s event, seismologists had been warning that aftershocks could continue for a prolonged period of time.

“I’m not comfortable inside,” she said.

California is prone to earthquakes as it lies on a number of faults – regions where tectonic plates come together.

Dr Jones told the Los Angeles Times this fault could be up to 30 miles long.

“The fault is growing,” she said. “We ruptured a piece in the first earthquake… and we’ve ruptured more now.”

The San Andreas Fault is the largest, extending about 1,200km through the state.

But Dr Jones said this quake was in a distant fault system, and was unlikely to trigger a quake along the San Andreas Fault.

Quake raises fears of ‘the Big One’

By Peter Bowes in Los Angeles

Californians are on permanent alert for the ‘Big One’, a catastrophic earthquake that seismologists say is well overdue.

This latest series of quakes has caused relatively minor damage – that we are currently aware of – but they have rattled nerves, big time.

The latest was felt as far afield as Las Vegas in Nevada, Palm Springs to the east of Los Angeles, and Beverly Hills.

With a baseball game in progress at Dodger Stadium, in downtown LA, people fled from their seats as the building started to shake – although the players, apparently oblivious to what was happening, continued with the game.

This event serves as a wakeup call to residents of densely populated areas, like Los Angeles, that it is only a matter of time before the mighty San Andreas fault blows. A magnitude of 7.0 or higher in Los Angeles would likely cause widespread death and destruction.

Plane ‘shot down’ in Libya