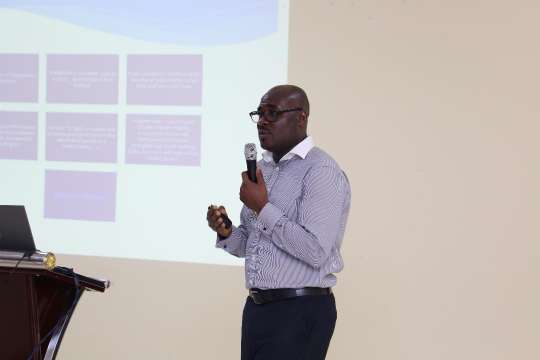 Ghana Integrity Initiative (GII), the local Chapter of Transparency International (TI) has reiterated that corruption suppresses the voice of people in land-related decision-making.

Mr Okai made these remarks in his presentation in Accra at a Multi-Stakeholder Land Forum organised by the GII under the theme: “Role of Civil Society in Land Discourse”.

It would be recalled that since June 2015, TI and its national chapters in seven Sub-Saharan African countries; Ghana, Kenya, Zimbabwe, Madagascar, Cameroon, South Africa and Uganda have been contributing to German Ministry for Economic Cooperation and Development’s (BMZ’s) One World – No Hunger special initiative through its work on The Land and Corruption in Africa (LCA).

The LCA project aims to improve livelihoods for men and women adversely affected by corrupt practices in land administration and land deals in Africa, through security of tenure as well as equitable and fair access to land in rural, peri-urban and urban areas.

The Bill, which was first introduced in Parliament in 2018 but was later withdrawn, would be tabled again before the House this year.

It seeks to consolidate and harmonise in one simplified form, about 166 existing laws relating to land, to regulate land use and enhance effective land management in the country.

Mr Okai, who gave an overview of the LCA project, said Ghana was predominantly agrarian and that land is an indispensable asset.

He said they were able to support over 1,200 community members through ALAC to seek compensation and retrieval of over GH¢225,400.00 withheld compensation

Others include adding up to data and research on Women, Land and Corruption; – Three Baseline researches were conducted and using Participatory Video to support widows to tell their stories – Customary practices, land rights.

There rest were citizens empowered through Community Land Clinics, Radio Awareness Programmes, Land For a and engagement with the youth – Land Fora.

On the way forward, Mr Okai recommended the initiating the Land Administration Clinics/ALAC to provide outlets through which affected people can receive support and improving monitoring by public sector agencies.

The current project, which ends in December 2019, has successfully contributed to an increased awareness on land rights of citizens, empowered and given a voice to marginalized groups including widows and provided a grievance redress mechanism and corruption reporting platforms for victims and witnesses of corruption.

Corruption in land governance is commonly defined as the abuse of entrusted power for private gain while carrying out the functions of land administration and land management.

The Forum, which brought together stakeholders such as parliamentarians, policymakers, civil society, the Lands Commission, traditional leaders, women’s group and the media sought clarifications and discuss the current status of the Land Bill, how to improve dialogue on land sector reforms and build partnerships and strategies for land sector advocacy.