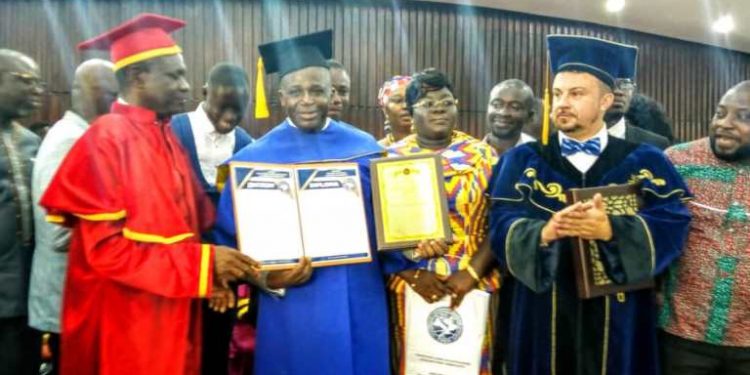 Mr. Frank Adjei, Nana Kwadwo Gyasi, Elder Bismarck Amoah and Eric Opoku were honoured at a ceremony held on Saturday, 13th July, 2019, at the Great Hall at the Kwame Nkrumah University of Science and Technology, Kumasi under the auspices of the Bureau of Research on Governance, Commerce and Administration(BORGCA) and Confederation of Governance Assessment Institute (COGAI).

“Notwithstanding, your loyalty to support the Orphanages, Schools, Deprived Communities, Villages, fellow Businessmen and women, and also giving Scholarships to students within and across boundaries has today earned you this honour. You are a worthy model magnate, a well-founded philanthropist and a beacon of hope to the Ghanaian and the entire African continent,” the university indicated.

In the Real Estate and Hospitality Industry, Mr. Frank Adjei owns Hostels and Houses across Ghana, and these properties are managed by companies he founded such as Rema-Jason Company Limited and Rema-Jason Ventures respectively.

He equally owns an Entertainment Company known as Lovers Band, which provides services for Churches, Funeral Homes and Restaurants across the Country.

Mr. Frank Adjei is a philanthropic and he has touched so many lives with his generosity. He provides Scholarships to the needy but brilliant students, supports Churches, fellow Businessmen and women, Orphanages, Schools, Deprived Communities and Villages.

Mr. Frank Adjei has provided thousands of jobs to Ghanaians especially the Youth.

Society has indeed benefited and continues to benefit from the goodness and compassion of Mr. Frank Adjei.

It was on the basis of the above-mentioned achievements that motivated Ternopil National Economic University, Ukraine, BORGCA and COGAI to confer on Mr. Frank Adjei the Honourary Doctorate Degree.

The Communications Strategist and Director of International Relations for BORGCA/COGAI, Mr. Isaac Rockson, explained at the ceremony that Mr. Frank Adjei, Nana Kwadwo Gyasi and Elder Bismarck Amoah deserved to be honoured because they have worked hard to create numerous jobs to better the lives and living conditions of several people in Ghana. He stated that, ” We don’t just honour people but of great integrity and credibility”.

Prof. Gregory from the Ternopil National Economic University, in his congregational speech, commended the awardees for contributing positively and immensely to the development of Ghana.

However, Dr. Frank Adjei, in his acceptance speech, encouraged Ghanaians especially the youth to embrace humility, hard work, God-fearing and Knowledge over quick means of getting money.