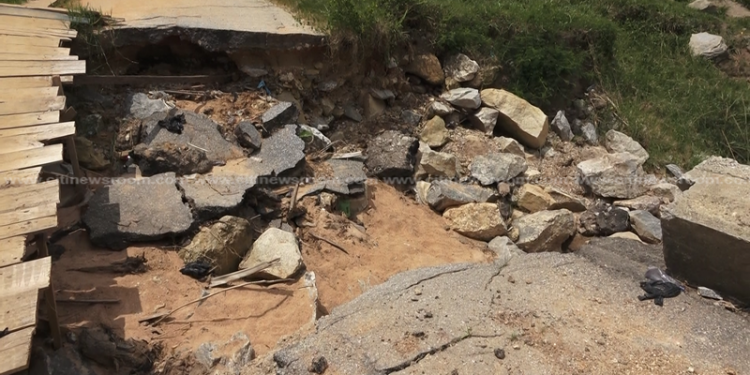 Residents of Quarry in the Kumasi metropolis have vowed to boycott the 2020 polls if their bridge which has been broken for about two years, is not fixed.

Some have even threatened to chase out politicians who will come to their area to campaign ahead of the 2020 general elections.

According to them, day to day activities have come to a standstill and they have been cut-off from other communities since vehicles are no longer able to cross the bridge, thereby making life unbearable for them.

The area used to be a quarry site but for decades now, those operations have not been going on.

“Quarry” then became the name of the area. Buildings in the area seem to suggest that the area is developing steadily.

However, for the people here, there are a number of challenges they are confronted with; security, poor road network and to them, the most pressing one is a broken bridge that used to connect Quarry to Truba through to Mamponteng, Kenyasi and other areas which remains unattended to, two years on.

The residents say this situation has worsened their plight. As a result of the broken bridge, for the past two years, vehicles are unable to use the road to other adjoining communities, which compels them to travel long distances and spend more on transportation.

They added that because of the broken bridge and the poor nature of their road, vehicles rarely ply the area and so, during emergencies, they are left with no or limited options which put them under unbearable circumstances. Some residents have put some structures on the bridge to aid human movement. Vehicles however cannot use it. Kwasi Kwarteng, the Assembly Member for the area says he has reported their concerns to relevant authorities but no action has been taken.

The residents have expressed their disappointment with politicians who they say after several failed promises have still not addressed their concerns.

“We are humbly appealing to government to address our challenges. If they don’t fix them, they shouldn’t step foot here to campaign ahead of the 2020 general elections,” a resident stated.

“If they don’t fix our bridge, we shall not vote again. Residents of Quarry and Truba will all not vote,” another stated.

Residents of Quarry who would want to travel to Truba or to other areas mostly would have to walk long distances or pay more if they are lucky to have taxis around to take other alternative routes. A pregnant woman who usually crosses the bridge to access healthcare, says the situation leaves her helpless and she gets tired for walking the long distance. She wants government to fix the bridge to address the challenge.

The structures put on the bridge to aid human movement is the only way that people are able to cross the bridge but it becomes extremely dangerous when the river gets flooded. Kwadwo Asumadu, a resident in the community said not long ago, he was forced to seek shelter in a church nearby; a situation he says they are embarrassed about.

School children who would have to cross the bridge to go to school are also unable to do so anytime it rains. They are also making a call on government to help fix the bridge:

Quarry is under the Kumasi Metropolitan Assembly, KMA. The Assembly member says they have made several calls on the KMA to address the challenge but the situation remains the same.

A check at the KMA office showed that authorities had been written to on the need to fix the bridge. Authorities at KMA disclosed to Citi News that the bridge is on their action plan but could not tell when exactly work could begin. They also noted that more resources would have to be invested in the project and as such, it is beyond their capacity. Authorities at KMA later indicated to Citi News that the issue has been referred to the Works and Housing Ministry for action. The Mayor of KMA has however not been available to speak on record after several arrangements.