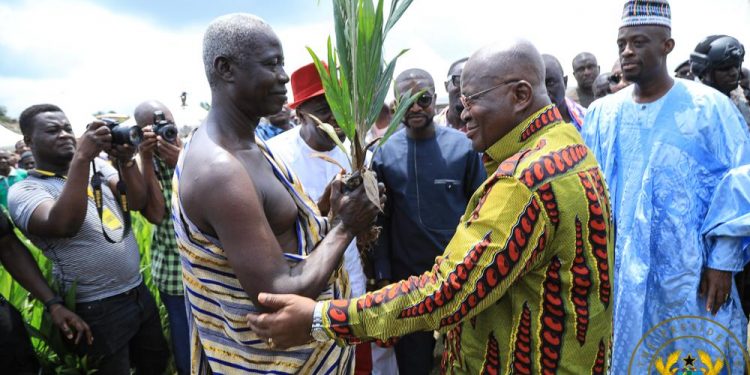 President Nana Akufo-Addo has criticised former President John Mahama for overseeing what he called zero progress in the cocoa sector.

Addressing a durbar of Chiefs at Daboase, in the Wassa East district of the Western Region, on Tuesday, President Akufo-Addo said Mr. Mahama failed to build on the gains of the Kufuor administration in the sector.

“President Mahama came to meet a production level of 1 million tonnes, and yet, by the end of his tenure, it had dropped to barely 700,000 tonnes.”

The President’s comments come after Mr. Mahama criticized the government’s decision to stop the supply of free fertilizers to cocoa farmers.

“I feel very sad for our cocoa farmers”, John Mahama said at Enchi in the Aowin Constituency.

“We had good plans and started implementing good policies for the cocoa sector. When we started giving out free fertilizers, it was because we realized it will help improve yield, and in the 2016/17 crop year, we recorded 950,000 tons…”

He added that he did not expect anything positive from the National Democratic Congress flagbearer.

“I want to hear from them what they are going to say to this challenge. We are challenging them to come and tell us what they have done that is boosting agricultural and cocoa production in Ghana. I can tell you the answer in advance – Zero! Zero! Zero!”