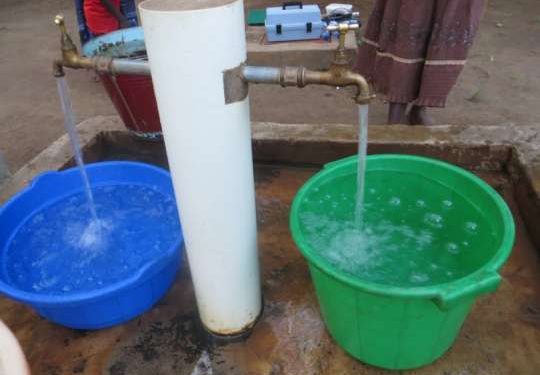 Parliament has ratified a planned drawdown by Government of Ghana for an amount of 12 million euros within the 2019 financial year to commence the construction of a potable water infrastructure project in Tamale and its environs.

The amount represents part of a 233.963 million euros facility by the Government of Ghana and Deutsche Bank AG, London Branch, and the United Kingdom Export Finance; and 43.007 million euros commercial facility agreement with the same entity.

The object of the loan, according to a report of the Finance Committee, released to the House on Tuesday, is to finance the design, construction, and commissioning of a Potable Water Infrastructure Project in Tamale, Northern Region

The project, among others, is expected to improve potable water to areas that were not originally supplied, with a total of 30 million gallons of water to be added to the existing system.

This would lead to a reduction in the prevalence of common water-borne diseases, enhance opportunities for agro-processing businesses and generally improve the social well-being of the people of Tamale and its environs, as well improve on the services of health facilities.

Additionally, the provision of reliable water supply will further help to improve economic activities within the project catchment area as direct and indirect jobs would be created during the construction period.

Ms Abena Osei-Asare, Deputy Minister of Finance, announced in the Finance Committee’s Report, presented to the House that “Government intends to commence the project as quickly as possible and has programmed to draw down an amount of 12 million euros within the 2019 financial year upon the completion of all the loan and project approval processes.”

All other things being equal, the project is expected to be completed within 54 months, comprising six months Development Phase and 48 months Works Implementation Phase.

The proposed project is expected to be the single biggest water project in the northern part of Ghana, since independence, and its successful implementation is expected to be a significant boost to the Water for All by 2030 agenda of the Government of Ghana.

It is expected to meet the increasing water demand for Tamale and its environs up to the year 2040 planning horizon.

Tamale and its environs contribute significantly to the agricultural fortunes of Ghana by producing a large number of arable crops like maize, yam, cassava, beans, and rice.

Together with the newly created Savannah Region, the Northern Region boasts of a significant part of the population of Ghana, thus having a significant and increasing demand for water. The Area also hosts several tourist sites including the Mole National Park as well as the Mystic Stone at Larabanga, a patterned vernacular architecture and at the entrance to the Mole National Park, and the Historical Mosque, both located at Labaranga.

The existing water supply system for Tamale and its environs was constructed in 1972, and a Treatment Plant is located at Nawuni, on the White Volta, 37 km northwest Tamale.

Expansion works were carried out on the system in the year 2008, and that included the construction of a 20,000m3 storage reservoir at Yapei Yepalsi, which increased the production capacity of the water treatment plant from 25,000m3/day to 44,000m3/day.

As a result of the rapid population growth in Tamale and its environs, the demand for water has once again outstripped supply; and there are increasing numbers of residents who do not have reliable access to potable water.

In order to mitigate the situation, Ghana Water Company Limited has had to implement a water rationing program in the Metropolis and its environs.

The Committee, however, expressed concern over the law governing the agreements being English Law, explaining that in the event of arbitration or other dispute resolution in connection with the agreements, the briefs may go to English lawyers to the disadvantage of Ghanaian lawyers.

It, therefore, recommends that going forward,  the Government of Ghana should insist on Ghanaian Law to be the governing law for the resolution of all disputes arising under or in connection with agreements to which the Government is a party.

As part of measures to enhance revenue collection from the water to be produced under the Project, there would be rigorous metering for water consumed, and District Metering Areas would be established to monitor the water pumped to each locality.

The Committee informed the House that the project design includes the installation of a Source and Collection Data Acquisition System to help detect faults and ensure that water losses are reduced to the barest minimum.