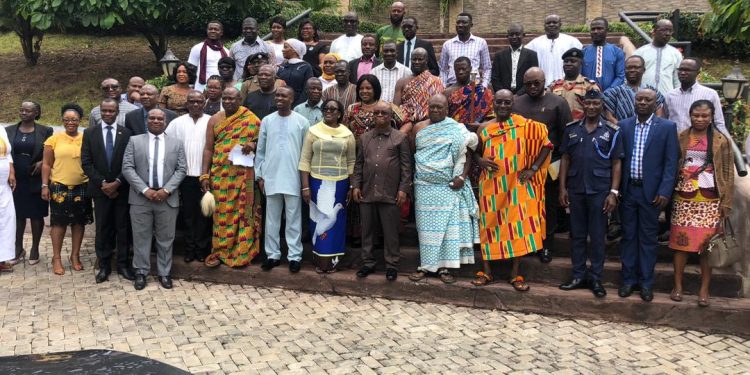 The National Roads Safety Commission is making a strong case for the beefing up of the commission’s staff strength and stronger collaboration with the media prior to its conversion into an authority.

The commission which is celebrating 20 years this year has worked to reduce child, pedestrian and passenger related fatalities resulting in a reduction in the fatality rate from about 27 per every 10,000 vehicles to 8 per every 10,000 in 2017 but will require not just a stronger workforce but also a stronger partnership with the media in keeping the roads safe.

“One side of the road safety story which has not received much attention is the staffing constraints of the commission. The entire capacity of the commission for the past 20 years is less than 70. As passionate, motivated and skilful as they are, they have had to carry this nation of 25 million road users in their tinny shoulders,” the Commission’s Board Chair, Rev Ismaila Awudu said.

The National Road Safety Commission as part of its 20-year anniversary celebration is currently holding a mid-year performance review in Ho under the theme; National Road safety at 20, the journey so far.

The commission, according to its board chair, Rev Ismaila Awudu, has been devising new methods of incentivising other stakeholders including the coordinating councils by ranking regions by the safety of its roads.

This he said will ensure the involvement of regional political leadership in road safety issues.

“The Board is concerned about the current road safety situation. In view of that, it is working with stakeholders on a scheme that will reward or appreciate safer regions in a regular interval”.

The Executive Director of the national road safety commission, Ing. May Obiri-Yeboah noted that the commission has successfully reduced fatalities on the roads albeit with a limited staff.

She noted that the conversion of the road safety commission into an authority will require a higher staff strength to deliver on the mandate.

“I have followed with keen interest the advocacy or War Against Indiscipline spearheaded by Citi FM of Accra and found it very encouraging. The media in the region can take a cue from that, in order that we can work together to make our roads safe,” Dr. Letsa indicated.

Afoko’s family to go to Supreme Court over bail reversal