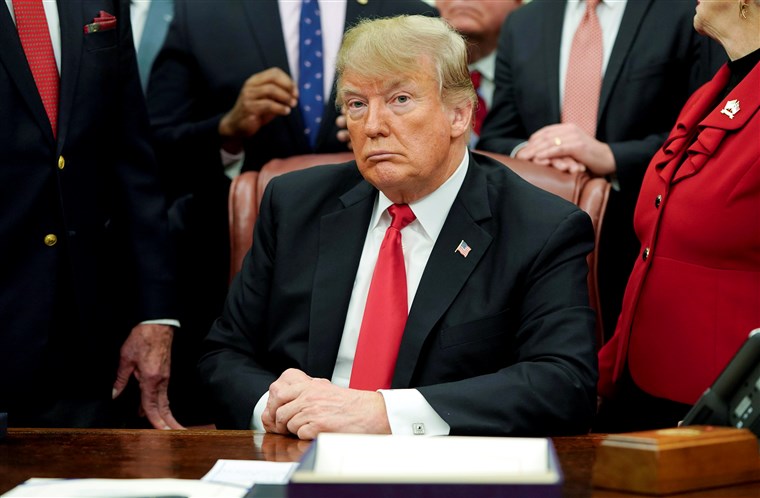 The UK’s “wacky” ambassador to the US is “a very stupid guy” Donald Trump has said, amid a row over leaked emails.

This came after Downing Street reaffirmed its “full support” for Sir Kim Darroch.

On Sunday emails revealed the ambassador had called the Trump administration “clumsy and inept”.

Sir Kim will now no longer meet the president’s daughter Ivanka Trump as scheduled on Tuesday, the BBC has been told.

A spokesman for Theresa May said that Sir Kim is “a dutiful, respected government official” and confirmed there are no plans for Mrs May and Mr Trump to hold a call to discuss relations following the leak.

Earlier on Tuesday Mr Trump tweeted: “The wacky Ambassador that the U.K. foisted upon the United States is not someone we are thrilled with, a very stupid guy.

“He should speak to his country, and Prime Minister May, about their failed Brexit negotiation, and not be upset with my criticism of how badly it was handled.

Mr Trump had already responded to the leaked emails by saying “we’re not big fans of that man and he has not served the UK well”.

In Monday’s series of tweets he said Sir Kim was “not liked or well thought of within the US”.

Apparently angered by Mrs May’s support for the ambassador, he again lashed out at her handling of Brexit, describing it as “a mess”.

Mrs May stepped down after failing to have a Brexit deal approved by parliament and the governing Conservative Party is choosing between two remaining candidates – Boris Johnson and Jeremy Hunt – to replace her.

By saying he won’t deal with Sir Kim Darroch any more, Donald Trump is apparently all but declaring the ambassador to be persona non grata. That is the formal legal process by which a host government expels a foreign diplomat.

The key question now is what the president means by the word “deal”. If the royal “we” used by Mr Trump means that his entire administration will no longer deal with Sir Kim or any of his staff then the British government may have to decide to fast track the retirement of their man in Washington.

Sir Kim, who is an honourable man and was stepping down anyway in a few months, may decide to resign. If, however, Mr Trump merely means he won’t deal personally with Sir Kim then the ambassador may stay on until the new prime minister can make his own appointment.

This all presents the British government with an awkward dilemma – to buckle under US pressure and bring Sir Kim home, risking accusations of abject weakness, or to stand firm and defend their ambassador for doing his job and telling the truth as he sees it, risking even further damage to the UK/US relationship.

What did the leaked emails say?

He questioned whether this White House “will ever look competent” but also warned that the US president should not be written off.

The emails, dating from 2017, said rumours of “infighting and chaos” in the White House were mostly true and policy on sensitive issues such as Iran was “incoherent, chaotic”.

Sir Kim said Mr Trump was “dazzled” by his state visit to the UK in June, but warned that his administration would remain self-interested, adding: “This is still the land of America First.”

Who is Sir Kim Darroch?

Sir Kim represents the Queen and UK government interests in the US.

Born in South Stanley, County Durham, in 1954, he attended Durham University where he read zoology.

During a 42-year diplomatic career, he has specialised in national security issues and European Union policy.

In 2007, Sir Kim served in Brussels as the UK permanent representative to the EU.

He was the prime minister’s national security adviser between 2012 and 2015, dealing with issues such as the rise of the Islamic State group in Iraq and Syria, Russian annexation of Crimea, the nuclear threat from Iran and the collapse of government authority in Libya.

He became ambassador to the US in January 2016, a year before Donald Trump’s presidential inauguration.

Queen in Cambridge: 'Still capable of planting a tree' at 93