US House condemns Trump attacks on congresswomen as racist 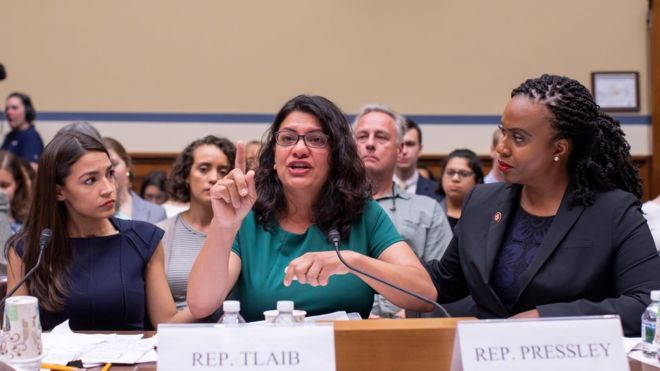 The US House of Representatives has voted to condemn President Donald Trump after a series of attacks aimed at four congresswomen.

The resolution denounced Mr Trump’s “racist comments that have legitimised fear and hatred of New Americans and people of colour”.

Mr Trump had been accused of racism and xenophobia for telling the members of congress to leave the country.

The president has since tweeted: “I don’t have a Racist bone in my body!”

Tuesday’s debate in the Democratic-controlled chamber was a highly polarised debate, with various Republicans insisting the vote itself was a breach of decorum.

Passing a resolution – which is a statement of opinion and not legally binding – criticising presidential conduct is very rare.

In a series of tweets on Sunday, the president said Representatives Alexandria Ocasio-Cortez, Ilhan Omar, Ayanna Pressley and Rashida Tlaib “originally came from countries whose governments are a complete and total catastrophe” and should “go back”.

Mr Trump did not explicitly name the women – all four of whom are US citizens – in his initial Twitter tirade, but the context made a clear link to the four Democratic congresswomen, who are known as The Squad.

The congresswomen dismissed the comments as a distraction on Monday, and urged people instead to focus on policies rather than the president’s words.