Book Review: From James Town to James Town; letters to an African Child 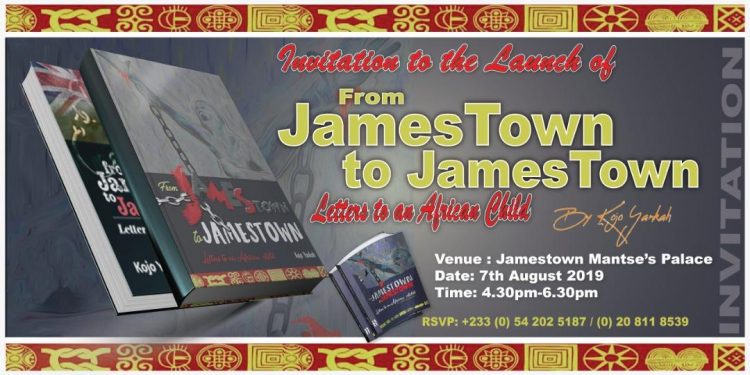 I consider it a privilege and a necessary mandate to write a review on Hon. Kojo Yankah’s book, From James Town to James Town; Letters to an African Child.

The book comes at a very providential time in history. This year marks four hundred years since the enslaved Africans first arrived in the United State of America.

Consequently, and rightly so, the history of the slave trade is receiving a renewed interest and robust conversation. On the lips of both Africans and Euro-Americans is the vow not to allow the de-humanization of Africans and human beings in general to recur.

In April this year, the University of Cambridge commissioned a team of researchers to find out about the possible complicity of the university in the de-humanization/enslavement of Africans. Indeed, while the world appears remorseful and shifting from blame culture to penitential culture about the evils of slavery, we are painfully aware that Africa continues to be a pawn in the hands of Euro-Americans and Arabs.

The existential reality that post-colonial Africa has not recovered from the legacy of slavery, characterized by abject poverty, high levels of illiteracy, economic and political morass, and pillaging of the continent’s resources is an emblematic of a continent that continues to be emaciated, pillaged, and exploited. Throughout the ages, the question has been asked: “Have Africans contributed anything at all to civilization?” This question is fundamentally problematic because it feeds the narrative that Africans were inferior – a narrative that, together with the misinterpretation of the Christian Bible, justified slavery.

As Dr. Yankah accurately narrates in the book, this question emerges out of the crass ignorance of western scholars. The question also bespeaks the deliberate attempt in Western epistemology to obscure the centrality of Africa as the natal home of civilization. Certainly, the fact that the British biologist, James Watson, could as late as 2007 say that Africans are mentally inferior is enough to tell Africans that they still have more work to do to reconstruct their own narrative. This must follow the historiography of the Ewe people of West Africa that, ‘Until the lions tell their own story, the tale about the hunt will glorify the hunter.’

Much as the book has the genre of a historical novel, the author walks us through a splendid history of Africa and the world that breathes with life and littered with multiple instances of Africa’s contribution to laying the foundation of human forward march to progress. While it is quite obvious now that human beings originated from Africa, the author moves away from that simplistic etiological narrative of social evolutionists to show how humankind’s emergence on the scene of progress began in Africa and with Africans. Most importantly, the author contributes to the vexatious and heated debate that ensued between Martin Bernal, a historian, and Mary Lefkowitz, the American classical scholar, over the progenitors of western civilization. Certainly, Dr. Yankah leaves us in no doubt that Africa served as the cradle of human civilization. Citing scholarly works and using his personal experiences as a voluble Pan-Africanist and pioneer organizer of PANAFEST in Ghana, which involved his crisscrossing of continents (a globetrotter), he concluded without any equivocation that Africa’s contribution to human civilization cannot be overlooked without doing epistemic injustice to the continent!

Certainly, the book is not just a historical novel. It is also a text that challenges some paradigmatic and metanarrative about religion and anthropology. It renews the debate over the origin(s) of Christianity, by providing African Christians with a nugget to investigate the African heritage of Christianity. Since the 1960s, many African theologians have not spared the pen and ink in seeking to indigenize Christianity in Africa. They have asked the question, ‘Could Jesus be an African too?” Mr. Yankah contributes to this conversation by providing evidence that, not only could Jesus be an African, but also Christianity has its roots in Africa.

While many scholars have wondered about the source of motivation for slavery, the author lays the narrative well at the center by highlighting how Europeans appropriated the Bible and pseudo-science, nourished by racism to enslave Africans. The Hamitic hypothesis, which flowed from the perceived curse of Ham –the acclaimed progenitor of Africans – served as the linchpin of European pillaging and robbing of Africa. The author poignantly identifies the fact that the enduring legacy of slavery has lingered in the minds of Africans through the miseducation of the African race. While education, in its true conceptualization, is expected to birth a renaissance in the lives of the educated, western education that Africans inherited and the colonial library that was bequeathed to them by the European colonizers have numbed and neutralized the ability of Africans to free themselves from all forms of mental slavery.

Indeed, Dr. Yankah has provided the basis for the direction of the gavel. He has contributed to helping Africans and those who care to know to reengage western epistemology that continues to push Africans to the fringes of life. He has armed every reader to think critically and analytically in engaging metanarratives that obfuscate and blindfold a balanced account of the continent of Africa.

Having personally been informed and armed to rethink my ‘Africanness’ and how to foster intercontinental relations with other people of African descent in the diaspora, I unreservedly recommend the, From James Town to James Town… Letters to an African Child. to historians, anthropologists, linguists, scholars of religions, seekers of sublime truth, and pupils and students. They will all have an uncommon taste of African culture, history, language, and religion from the book. More importantly, they will be armed to help liberate the continent of Africa from its poly-challenges!