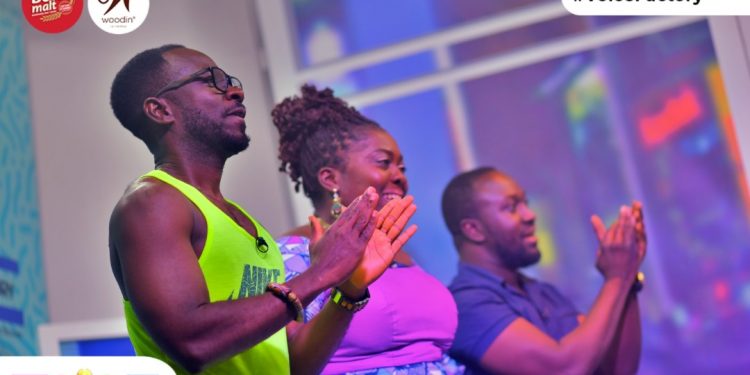 It was a night of great gospel and inspirational music by the contestants of Citi TV’s music talent show, Voice Factory.

The fourth episode of the contest, with support from the Musical Lunatics band had Araba as the opening act with a rendition of ‘So Will I’ by Hillsong United.

Cleck Boyson followed with Vernon’s ‘You Covered Me’.

After that, Charisma came through with Stonebwoy’s ‘Grace’.

There were also amazing performances from KennieKings who did ‘Hallelujah’ by CSO and Idara who sang Sinach’s ‘Way Maker.’

Derrel Wells’ ‘He’s Able’ was done by Ayjay Sam, a performance that got him a standing ovation by the judges.

Lina did a rendition of Goodgirlla’s ‘Bless Me’ with Debbie wrapping it up with Celestine Donkor’s ‘Okronkronhene.’

It's all about gospel music on the #VoiceFactory this evening. Who goes home? Who impresses the judges and the viewers?

This week, Joana Ababio, known in the competition as Oye was evicted.

She follows Red’M who was also evicted from the competition last week.

The remaining 8 singers will battle it out for the top spot, in live performance shows for the remaining weeks.

The judges for the night were gospel musician Edinam Bright-Davies and Richie Mensah, CEO of Lynx Entertainment and ‘Made in Ghana’ ambassador Okyeame Kwame.

‘Voice Factory’ is aired on Citi TV on Saturdays at 7 pm with daily updates at 11:30 pm.

Amidu should descend on energy sector over alleged fraud – Casely-Hayford

Amidu should descend on energy sector over alleged fraud - Casely-Hayford