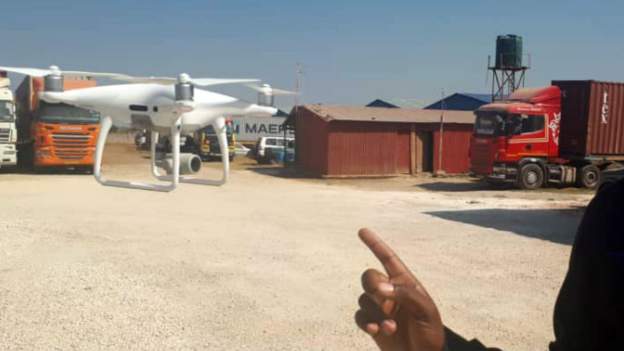 The tax authorities in Zambia have started using drone surveillance to track down lorries smuggling in goods to avoid customs duty.

Seven trucks were impounded by the Zambia Revenue Authority (ZRA) in the north of the country over the weekend after drones spotted them hidden in the bush off the main road.

“The drones go out on patrol on risky routes or complicated routes where our ground patrols or checkpoints have failed,” ZRA corporate communications manager Topsy Sikalinda told the BBC.

“On this particular operation, the drones went out on the Kapiri-Serenje route. They noticed that main road was empty and they picked up some activity about 14km [about nine miles] in the bush.”

Vehicles travelling south along the road could be coming from neighbouring Democratic Republic of Congo, Malawi or Tanzania.

Mr Sikalinda explained that drivers often offload goods in the bush and then put them on smaller vehicles that are not likely to be suspected.

“We take it to be local trade hence they escape the tax net,” he said

ZRA hopes to raise more revenue through the use of such technology, the tax official added.