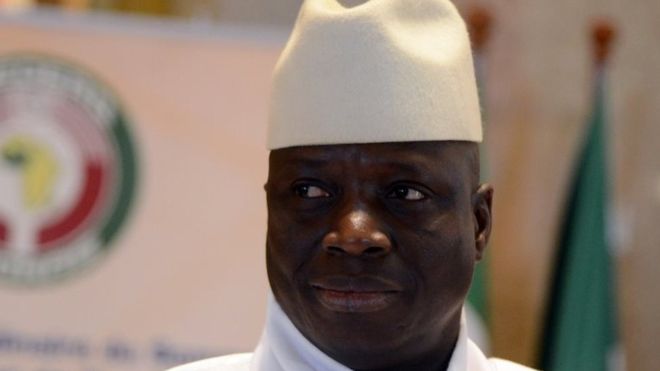 Relatives of people murdered under the regime of The Gambia’s former ruler Yahya Jammeh say they are outraged that the government plans to release three self-confessed assassins.

Malick Jatta, Omar Jallow and Amadou Badjie were members of a paramilitary unit known as the “Junglers”.

The government said they would be freed soon following their confessions at the country’s truth commission.

“Our team was a hit squad for Yahya Jammeh,” Mr Badjie told the commission.

“We had blind loyalty for Yahya Jammeh,” he added

The three assassins were arrested by military police in 2017, when President Adama Barrow took office after winning elections in December 2016 to end Mr Jammeh’s 22-year rule.
Mr Jammeh initially refused to give up power, but went into exile after regional states sent troops to force him to step down.

During hearings about two weeks ago, the assassins accused Mr Jammeh of ordering numerous murders, including the notorious 2013 killings of two US-Gambian businessmen and veteran local journalist Deyda Hydara.

“I feel so disrespected as a mother that my government is setting free the men who confessed to the savage killing of my son,” Ya Mamie Ceesay, mother of murdered businessman Alhaji Ceesay, was quoted by campaign group Human Rights Watch as saying.

Mr Jammeh has refused to co-operate with the commission.

Justice Minister Abubacarr Tambadou told BBC Focus on Africa that contrary to earlier reports the men had not yet been released, but they would be freed soon.

He defended the decision, saying it would encourage other human rights violators to testify.

“We are not talking about courts where people are prosecuted. This is a fact-finding process…

“What we must not do is to scare people away from telling the truth because that will not be in anyone’s interest,” Mr Tambadou added.
‘Premeditated murder’
Mr Hydara’s son Baba said it has been hard for the family, who have been seeking justice for 15 years, to hear about the hit squad.

He told AFP news agency that the testimony from Mr Jatta, who admitted being one of the men who killed his father, had affected him.

“How it was planned, how he explained it, it’s like they did their homework. They studied. They really did research on how and where to hit him… It was very premeditated,” he said.

Reuters news agency quoted him as saying the family was “appealing to the government to make sure that these confessed killers are not in our streets, are not in our communities”.
News that the soldiers are to be released has caused an outcry, journalist Saikou Suwareh Jabai told BBC’s Newsday.

But he said the TRRC was proving a healing process, helping victims and their families find closure.