Ghana card is for development not voting – Asiedu Nketia 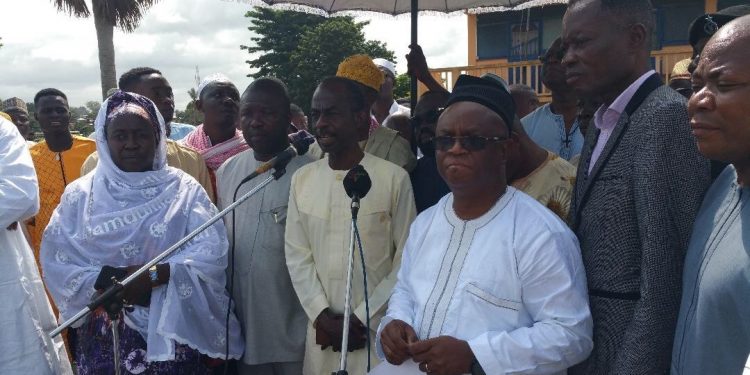 Mr Johnson Asiedu Nketia, General Secretary of the National Democratic Congress (NDC) has said the Ghana card is for development and not voting.

“Registrations as citizens everywhere is the basis for development so let’s look at it from that angle and not politics and voting,” he said.

Mr Asiedu Nketia said this when he joined Muslims in Ho to celebrate Eid Al-Adha.

He said the country’s constitution was clear in mandating the Electoral Commission as the only institution to determine what should be used for voting and that the Ghana card by the National Identification Authority could not replace voter’s card.

Mr Asiedu Nketia said the registration figures would be used to spread development and that it was “unnecessary for someone to try to suppress population in some regions for election purposes.”

“Numbers matter. Denial of development starts from citizenship so let us all get involved and stop the frustrations,” he said.

He commended the Muslim community for the peaceful coexistence and contributions to national development.

Dr Archibald Yao Letsa, the Volta Regional Minister said challenges with the registration were being addressed and that some 100 centres would be maintained for mop up after the mass exercise in the region.

He said National Identification offices would also be established in the districts, saying there was no cause for worry.

Dr. Letsa said the government was grateful for the support it was receiving from the Muslim community and urged them to remain tolerant and emulate the show of statesmanship by the National Chief Imam, Sheikh Dr. Osman Nuhu Shaributu.

He said government was introducing prudent initiatives to modernise the economy and formalise the informal sector to quicken economic development.

The Regional Minister said soon, the national property addressing and tagging project would start in the region and called for support from all.

Alhaji Hamza Danjuma, Volta Regional Chief Imam reminded Muslims to follow the teachings of the Quran and led them to pray for the country and its leaders.

The Regional Minister pledged a package on behalf of government.

The NDC gave 20 cartons of bottled water and 20 crates of soft drinks and GHC1000 to the Muslim community to mark the celebration.