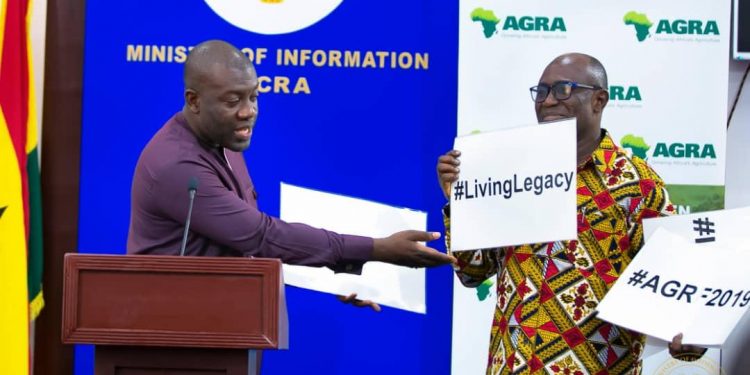 Ghana will host the 2019 African Green Revolution Forum (AGRF) in Accra from 3rd to 6th September 2019 on the theme “Grow Digital: Leveraging Digital Transformation for Sustainable Food Systems in Africa”.

The forum will be attended by over 2000 participants including Heads of State, Ministers and Eminent personalities from all over the world.

Country Head for AGRA Forster Boateng who disclosed this at a briefing in Accra said “the hosting of AGRF is very important to Ghana because of who and how the idea was birth. The founding Chairman of AGRF is our own son and former UN Secretary General Kofi Annan of blessed memory. It was Kofi Annan who insisted and brought AGRF to Africa. Ghana was the first country to host the Forum and 9 years later Ghana becomes the first country to host again”.

It is a unique multi-disciplinary forum where delegates discuss and commit to programs, investments, and policies that can counter the major challenges affecting the agriculture sector on the continent.

Since the first AGRF was held in Ghana in 2010 under the leadership of President J.E.A Mills, the Forum has annually brought together Heads of State, Ministers, business leaders, development partner leadership, thought leaders, farmer organization representatives, youth entrepreneurs, and other critical stakeholders to focus on the actions and policies needed to move the continental agenda forward.

Mr. Boateng said the Forum and its momentum have grown considerably over these years, and this is the first time AGRF has ever returned to a previous host country.

He said the AGRF 2019 will evaluate how far the continent has progressed in the past decade and look at ways to jumpstart what needs to be done differently in the next 5-10 years to put Africa’s agriculture on a new footing with digitalization being hailed as a key driver to the agricultural transformation.

AGRF 2019 will particularly identify and catalyze the enabling policies, programs, and investments to leverage digital transformation to drive sustainable food systems in Africa.

Given the unprecedented growth and adoption of digital technologies, Africa has an opportunity to leapfrog the agricultural transformation trajectory of the past and revolutionize life by overcoming isolation, speeding up change, creating jobs of the future and taking success to scale.

“The forum will take stock, evaluate actions, and learn from compelling evidence across the continent, presented by many of the most inspiring leaders, including young people, turning agriculture into thriving enterprises,” he said.

The AGRF Partners Group is made up of a coalition of 17 leading actors in African agriculture, currently including the AUC, the African Development Bank, the African Fertilizer and Agribusiness Partnership (AFAP), the Alliance for a Green Revolution in Africa (AGRA), the Bill & Melinda Gates Foundation, the Food and Agricultural Organization of the United Nations (FAO), Grow Africa, the International Development Research Center (IDRC) of Canada, the International Fund for Agricultural Development (IFAD), the Mastercard Foundation, NEPAD Agency, OCP Group, the Rockefeller Foundation, Syngenta, Yara International ASA, Grow Africa and Centre for Agricultural and Rural Cooperation (CTA).