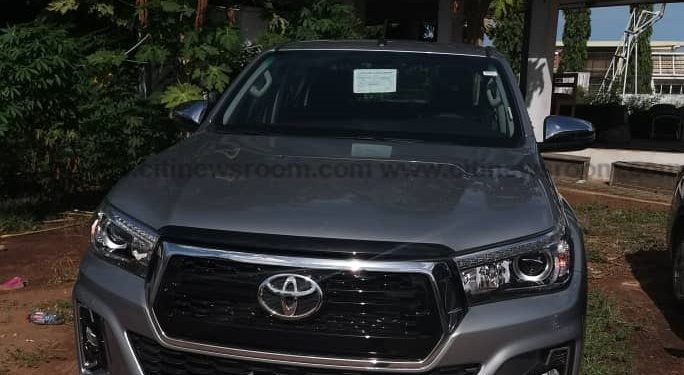 Police have successfully retrieved a Toyota Hilux pickup belonging to the Northern Regional Director of the National Builders’ Corps (NABCo).

The vehicle was stolen from the Director at his private residence on Thursday night by three armed men.

“I had a phone call from one of our guys that the regional coordinator called him and said armed robbers had attacked his private residence. They attacked him, three of them, two with AK-47 and one with a cutlass. They searched the whole house looking for money because they were asking him to give them money. After he said he didn’t have money with him, they searched the whole house and took the car keys. They gathered all of them in one house and locked them and made away with the car.”

However, Citi News gathered that the car was retrieved on Friday morning by the police in the Upper East Region but suspected robbers escaped with the car key.

The Northern Regional police crime officer, Supt. Kwabena Otuuo Acheampong who confirmed the development to Citi News said the police through intelligence carried out the operation that led to the retrieval.

“The good news is that, we have recovered it [the vehicle]. The Police intelligence has led to the interception of the vehicle in the Upper East Region. They [the suspected criminals] absconded with the key. No arrest was made,” he said.

Police are still investigating the matter.

A similar incident happened in the Savannah Region recently when a Toyota Hilux Pickup with registration number, WR 3516-19 presented to the Savannah Regional Coordinating Council by President Nana Akufo-Addo recently to assist with the administrative activities of the new region went missing.

The car was reportedly stolen by robbers when it was parked in the house of one, Alhaji Illiasu, a friend of the Regional Minister.

Alhaji Illiasu said, he gave the robbers the keys when they attacked him at his home and they grabbed him into the vehicle and drove off to a distance of about 20 kilometres away from his house, dropped him off and fled with the vehicle.