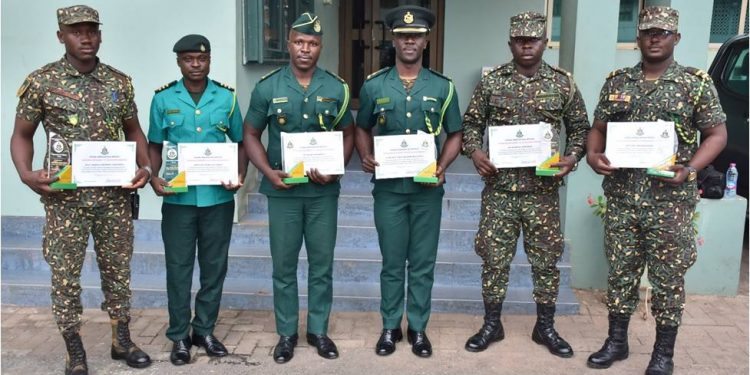 The Comptroller-General of Immigration (CGI), Mr. Kwame Asuah Takyi, on Wednesday, honoured six officers of the Ghana Immigration Service (GIS) at a staff durbar at the National Headquarters in Accra for their dedication to duty.

The honoured officers on 1st August, 2019 at Fielmon, an unapproved route, at the Ghana – Burkina Faso border in the Upper West Region, intercepted 1,950 bags of NPK fertilizers meant for the Planting for Food and Jobs programme and for declining a bribe of GH¢25,000.00 by the smuggler in the process of arrest.

Presenting the awards to the officers, the CGI commended the officers for acting swiftly to the call of the informant and for refusing to be enticed with money.

“This, he said, was a mark of integrity especially when the needs of man were endless and resources were increasingly scarce. It speaks well of you to have rejected such huge sum of money, GH¢25,000.00, despite your own economic challenges”, he noted.

“You have placed the interest of the nation first, and this shows a high sense of patriotism and I encourage all officers to emulate this good deed”, he added.

He explained that the certificates and plaques were being given to them for posterity sake.

“It is not just a paper but something your children will look on and be proud of you”, he said.

The CGI reassured the Officers at the durbar that they would soon bear arms to enable them to confront border crimes with the needed ruthlessness.

The Deputy Comptroller-General (DCG) in-Charge of Finance and Administration, Mrs. Judith Dzokoto-Lomoh was elated when presenting one of the awards to the officers and said: “they were not led into temptation but were delivered from it”.

The DCG in-charge of Legal, Research and Monitoring, Madam Baaba Asare, urged them to keep up the good work, and that, the honour done them should inspire them to do more.

“This is a good example for others in similar position to emulate”, she added.

The DCG in-charge of Command Post and Operations, Mr. Laud Kwesi Affrifah who was full of praise for the officers said he was proud of them, and that, it was heartwarming the President of the Republic, H.E Nana Addo Dankwa Akufo-Addo in his recent tour of the Upper West Region acknowledged the efforts of the Service.

They were presented with a certificate, an undisclosed amount of money and a plaque each by the CGI, Deputy Comptroller-Generals, the Head of Operations, Deputy Commissioner of Immigration (DCOI) Isaac Luortey and the Head of Administration, DCOI Maud Anima Quainoo.