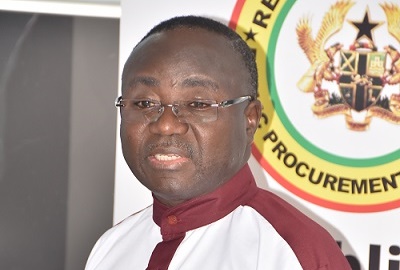 Investigators at the Office of the Special Prosecutor are currently questioning the suspended Chief Executive Officer of the Public Procurement Authority, Adjenim Boateng Adjei.

He arrived at the office around 10am on Thursday following an invitation to him by the office.

The invitation letter read in part;

In the documentary, a company, owned by Mr. Adjenim Adjei was found to be getting many government contracts through restrictive tendering and selling those contracts to others for profit.

Citi News Umaru Sanda Amadu who was at the office of the Special Prosecutor reported that the sessions was being held behind closed doors.

The Office of the Special Prosecutor, according to some correspondence sighted by Citi News had already been investigating Mr. Adjenim Adjei prior to the airing of the documentary and the subsequent directive from the Presidency that the embattled official be suspended.

The President also referred him to the Commission on Human Rights and Administrative Justice (CHRAJ) because of conflict of interest claims.

The mediocrity of political eligibility [Article]