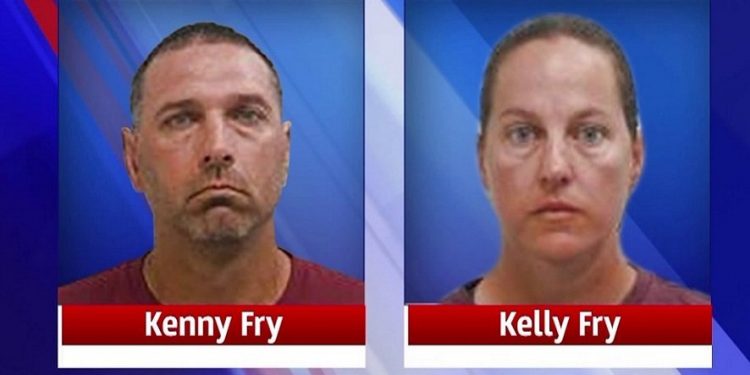 A white Iowa couple who pleaded guilty to abusing their then adopted Ghanaian children won’t serve jail time after they were sentenced to only two years of probation after their judgements were deferred.

The Des Moines Register reports that 42-year-old Kenny Fry and 40-year-old Kelly Fry, in addition to being fined $12,500 will have to complete 100 hours of community service each before the end of the year.

The fine and sentence were meted out to the couple after they pleaded guilty to two counts each of child endangerment.

She wrote that the couple did not properly handle the adopted children’s behavioural problems and did not get proper advice when they reached out for help, adding that it, however, did not free them of culpability, the Des Moines Register further reports.

A written recommendation for sentencing from the prosecutors of the case was also quoted by Relph:

“This is about a young couple who got in over their heads in a failed adoption, made poor decisions, and didn’t get help when they needed it, at least not the right help. … The defendants made some serious mistakes and, even though they may not be wealthy, I believe they should pay a hefty debt to society even if those payments take several years. On the other hand, I also feel strongly that if they pay that debt and fulfil the term of probation, they should not be marked as criminals for life.”

The Frys were initially arrested last year and charged with child endangerment resulting in bodily injury, neglect of a dependent person and child endangerment, according to the complaint and affidavit obtained by WHO. They were, however, subsequently released on bond.

According to a report, while the couple’s five biological children were living in “typical and age-appropriate childhood bedrooms” and eating meals without restrictions, their Ghanaian adopted children were remanded in a plastic-lined bedroom and were forced to use a plastic bucket as a toilet.”

An investigation began in January last year when a neighbour reported that two children knocked on her door and were crying to be let in.

The two children, aged 8 and 9 at that time, had been adopted from Ghana a few years ago, the affidavit stated.

The two Ghanaian children, a girl and a boy, who were subsequently removed from home told the police that they were homeschooled and made to share a room that was subdivided into two rooms made of wood.

The rooms were lined with plastic, and the doors had alarms so the parents would know if they snuck out.

“Each room only contained a small plastic mat, a blanket and a small shelf added to the wall,” the court documents stated.

There were no personal items, except for a plastic bucket used as a toilet.

The children said that they were not being given enough food, and were only being fed on oatmeal for breakfast, lunch and dinner while their other siblings had all they wanted.

In case they snuck out in search of food and were caught, they would be disciplined with physical exercise, a criminal complaint added.

Kelly Fry told investigators that they built the plastic-lined room because of the children’s bad behaviour as they would urinate and defecate in their original bedrooms.

She further claimed the children opted to use the plastic buckets as toilets instead of the home’s bathrooms.

But after being removed from the home, the children did not show any of the behaviours described by the Frys, investigators said, adding that one of the children who looked malnourished even gained eight pounds in three weeks after moving in with relatives.

US: Hungry boy called police emergency number and they brought him pizza