Young Positivist writes: To move or be moved – The issue of traffic in Accra 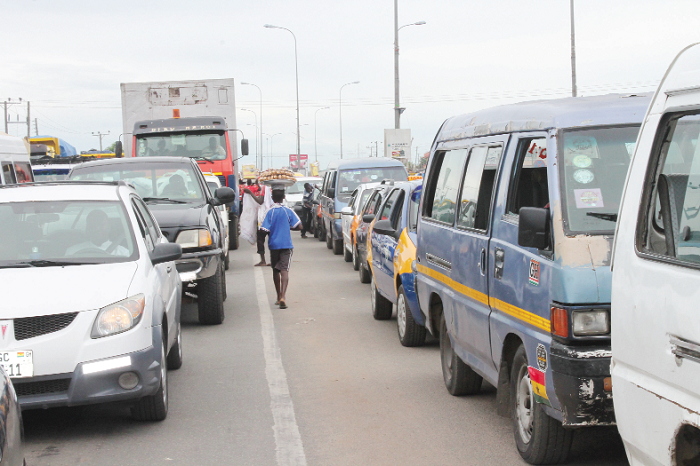 Have you ever been caught up in heavy traffic? How long have you lived in Accra and how many times have you experienced the hectic congestion that occurs on weekdays? What is the road system in Ghana? And what has been various governments response to the issue of traffic?

Have there been any measures taken by authorities to alleviate this menace? One will ask why I begin this write-up with so many unanswered questions. I must say that this topic is very dear to my heart and these are some of the questions I have asked myself anytime the issue comes to mind. The issue of congestion on our roads in Accra is a troubling matter that needs attention and we must play our part as responsible citizens to awaken the minds of our leaders to act. On this very particular note, I want to talk about the issue of traffic in Accra that seems not to go away.

Accra is the most populous city in Ghana and it also houses the seat of government. Many people prefer living in and around this capital city due to the level of development it has reached. It is one of the most beautiful places in the country; with a lot of beautiful sites, architecture, and industries located in the heart of Accra. Because Ghana practices the Unitary system of government, most activities are centred in Accra and for that matter most people prefer to live and establish their businesses there, believing that it is the only place both can succeed. I will not delve into the over-concentrated power of administration in this piece; I will leave that for another day.

This piece is a result of the collective experiences I have had over my four-year stay in Accra and its environs. Now, I want the general public to join the crusade to call for a proper solution to this menace once and for all.

Over the years, many residents in Accra have come to accept the terrible traffic in Accra as a norm, one that nothing can be done about. Anytime I hear residents utter statements of such nature, I marvel and wonder if we can’t use the brains God gifted us to think and implement lasting solutions to the problem at hand.

If your place of work is situated in the centre of Accra and you live miles away from this place, if you do not leave home early enough you are sure to fall into thick traffic on your way to work. This is so because during the weekdays, many people-workers, businessmen, traders, and even laymen- ply that route, making it a very busy one.

People, therefore, must wake-up as early as 4 am and start their journey all in the name of ‘beating’ traffic or to avoid being caught up in traffic. Though the traffic dies down a bit before noon, the situation is again awakened when workers close from work. For instance, people who live at Ayi Mensah down to the University of Ghana and beyond do go through a great deal of stress each day. These folks wake up very early to work and come back very late all because the main road becomes congested during working and closing hours.

What may be some of the factors which have led to this problem? The contributing factors are many but one of the key factors is that everyone in Accra seeks to buy a vehicle and drive to work due to the human traffic that takes place for buses in the mornings and evenings at the bus stops. What everyone seems to forget is that we do not have enough roads to accommodate all these vehicles being purchased daily. So, in a person’s innocent bid to escape one form of traffic, they unintentionally contribute to another.

So, to say, it is not a bad idea to buy a vehicle which will conveniently convey you to your workplace, but it becomes very worrisome when everyone is driving their car and there is not enough road infrastructure to accommodate them. Are we then not the cause of our troubles? Or do they do so to show people that they have money?

Again, the road system is another issue worth talking about because the double roads in Accra are simply inadequate. Though the highways are of nature, the smaller roads that drivers branch onto are often single lanes. Many a time, you will find that an occurrence of traffic has its roots from a malfunctioning traffic light or the junctions at which drivers from several different lanes ought to change lanes and branch to different roads.

Unfortunately, it has seldom been the vision of successive governments to expand existing roads for fear that the initiative will be politicized by the opposition and will lead them to lose votes in the next elections. Most of the roads you see now were constructed under the Kwame Nkrumah and Acheampong governments.

In addition to what has been enumerated above, the issue of traffic lights system and breakdown of vehicles on the road also contribute immensely to the congestion issue. In Ghana, one of the major problems we are confronted with is our lack of good maintenance culture and how we rarely pay attention to things that need repairs. Some of these traffic lights do not function at all and authorities do not care to replace them.

Others also have their good days, where they function effectively but at other times. Especially during rush hours, they just lose power. Since our drivers also do not have the patience to coordinate their movement on their own, one sees that since everyone is in a hurry, soon, a malfunctioning traffic light causes a jam on the road.

One of the reasons why the government sought to introduce a bill (Toll Levy)that will have helped remove all broken down vehicles on our roads was to help curtail the incidence of traffic and reduce accidents on our roads but unfortunately, this initiative did not see the light of day as citizens kicked against it. Sometimes in the course of driving, some vehicles breakdown and need to be taken off immediately to ensure that others pass smoothly.

However, because there are no proper measures in place to take them off the road, and because the road is not someone’s personal property to be given special attention, such vehicles remain there till they eventually start to cause problems.

My fear is that we have accepted this congestion problem on these roads, thinking that there cannot be any solution to the matter. Are we refusing to think as a country resulting in making this issue bigger than it originally was? Many years ago, Nkrumah saw some of these difficulties and put some measures in place which have sustained us till now, but our numbers are increasing each day and current leaders have refused to project into the future.

I must admit that some governments have made plans to construct some flyovers which have helped reduce the burden. This has not entirely eradicated the menace; the core issue has not been tackled and until it is tackled this canker will die with us.

What are some of the negative effects that this issue of congestion can bring? The problems are many and one of them is that this traffic issue retards development and does not help to increase productivity. A journey that can last for just twenty minutes can end up lasting for hours. When you use the same road on holidays and sometimes during weekends the situation is entirely different because the cars run freely. Also, workers do not get enough rest as a result of this congestion and this greatly affects work output.

Healthwise, these workers and citizens, in general, are at risk as most of them do not have enough rest or sleep because they must wake up very early to get to work and must suffer again when they close from work. This can lead to several stress-related disorders or even ailments which will affect the individual and then his capacity. Also, this problem can lead to an increased incidence of road accidents.

Sometimes, I ask myself what we have learnt as a country over the years from the advanced countries. It is amazing to know that each year, our leaders’ troop in and out of developed countries in Europe, Asia and America. Yet, they do not implement some of the innovative plans and ideas that have been put in place which are yielding results and solving problems over there.

This is my suggestion which I hope the government and leaders will see or hear and implement. I believe that there are too many ‘trotros’ and taxis on our roads. The state can, therefore, ban some of them from operating- especially those which are not in good shape- and provide some buses as State Transport Services. Thus, residents will have access to a reliable state-owned transport service that will convey them to and from their workplaces.

Due to its level of reliability, even individuals who drive will be encouraged to opt for the buses instead of their vehicles to reduce the number of cars that ply the roads daily. Not only will these buses be reliable, but they will also be available in their numbers, punctual and … If the State sees it cannot live up to the task of providing such a service, it can recruit a private company to handle that service. Even though I have not travelled to the United Kingdom, the United States of America or any other country in Europe or America, I don’t think the number of people living in Accra are more than the ones living in those big cities.

However, because the systems are in order and leaders have also put in place functioning measures, this problem does not arise there.

Also, I urge the government to construct more flyovers and bypasses to ease the stress on our main roads. This as a solution can come when the number of cars on our roads, which is the core issue, has been tackled.

If we do not resolve this problem, then, I am not being a citizen of doom if I say that I can envisage a time not so far from now when people will spend more than three hours on the road before they get to their workplaces. Nobody should feel indifferent about this issue. Let us move for the right things to be done because the matter cannot be gotten rid of simply by being mere spectators. It needs people to act upon it, to move it’-literally-, to be resolved.

It is very crucial, and the onus lies on us to act now before it is too late. We have come too far to let this traffic issue – which could have ended a long time ago- become a national headache (which I fear it already is). If we allow this to go on, then we have ourselves to blame as a country. Let’s “drop that car home” and join the state transport service when they are provided for us. Government and Accra Metropolitan Assembly (AMA) should put plans in place that will compel individuals to leave their vehicles home and join the ones they will provide. When this is done, I am very confident that Ghana will soon see some form of transformation and increase in productivity.