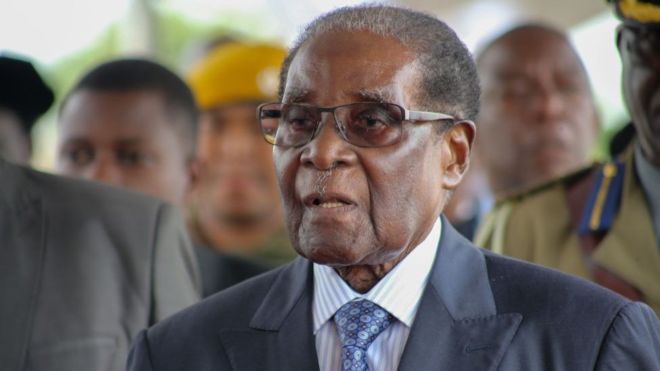 Zimbabwe’s former leader Robert Mugabe, 95, has been in hospital in Singapore since April, his successor Emmerson Mnangagwa has said.

He did not disclose Mr Mugabe’s illness. In November, he said the ex-president was unable to walk because of ill-health and old age.

Mr Mugabe ruled Zimbabwe for 38 years until he was forced to resign in 2017.

The military had placed him under house arrest, and parliament had threatened to impeach him after accusing him of allowing his wife, Grace, to “usurp constitutional power”.

His resignation opened the way for Mr Mnangagwa, his former deputy, to take power.

Mr Mugabe regularly travels to Singapore for medical check-ups but “unlike in the past when the former president would require just about a month for this, his physicians this time around determined that he be kept under observation for much longer”, Mr Mnangagwa said in a statement.

Many Zimbabwean politicians go abroad for medical treatment because of the poor state of the country’s health services.