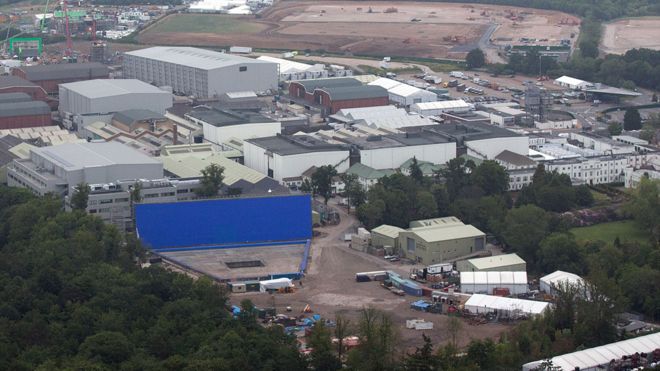 Disney is to make more blockbusters at Pinewood Studios in Buckinghamshire after signing a deal to take over most of the complex for at least a decade.

The film and TV giant behind the Star Wars, Marvel and Avatar movies will lease 20 stages plus other facilities.

Pinewood is famously the home of James Bond, not a Disney franchise – throwing 007’s future at the site into question.

The deal comes two months after Netflix announced it had taken a long-term lease at Pinewood’s Shepperton Studios.

Why has Disney taken over Pinewood?

The house that Mickey Mouse built is the biggest force in the film world, taking almost four times as much at the global box office as its nearest rivals in the first half of 2019.

Recently, it has shot films like Star Wars: The Rise of Skywalker, Maleficent: Mistress of Evil and Mary Poppins Returns at Pinewood. From next year, it will have near-exclusive use of the UK’s most famous studio complex. In fact, it will have the whole site except three TV studios and an underwater stage.

Disney hasn’t commented on the deal. But with studio space at a premium, this gives them the security of a long-term dedicated UK base capable of handling their biggest films.

“They’ve been making great films with us for many years and the fact they want to shoot so many more here is testimony not only to the quality of the teams and infrastructure at Pinewood, but also to the British film industry as a whole,” said Pinewood Group chairman Paul Golding.

The deal also squeezes Disney’s competitors out – non-Disney films to have been shot there in recent years include Rocketman, Jurassic World: Fallen Kingdom, Mary Queen of Scots and On Chesil Beach. But existing studio bookings with other film companies will be honoured.

What about James Bond?

Pinewood is 007’s spiritual home, with most of the franchise’s films made there. The complex even has the 007 Stage, which was built in 1976 for The Spy Who Loved Me.

The latest Bond film, No Time To Die, has been filmed there recently, and in June an explosion damaged part of the 007 Stage and injured a crew member.

Despite the Disney deal, it is believed that there is a possibility that, given its history, future James Bond films will still be filmed there.

Which films will be made there?

Disney won’t confirm, but it will continue to be the home of Star Wars movies, three of which are scheduled for the next seven years.

The company is planning four Avatar sequels, a fifth Indiana Jones film and numerous other live action flicks. Many of those can be expected to come to Pinewood.

And that’s before counting the possibility of TV shows, which Disney will need to fill its new streaming service, which launches later this year.

Again, Disney won’t confirm anything, but this is where it could get interesting, and could be the real reason the company has taken the new lease.

Twelve of the 22 Marvel films to date have shot at studios owned by the Pinewood Group – mostly Shepperton (Doctor Strange, Guardians of the Galaxy) and Pinewood Atlanta in Georgia (Avengers: Endgame, Ant-Man and the Wasp).

But Shepperton is now out of the picture thanks to the Netflix deal, and in May, Disney boss Bob Iger said it would be “very difficult” to continue filming in Georgia if a new abortion law was enacted.

Pinewood Group sold its share in Pinewood Atlanta in August. Black Widow shot at Pinewood this summer. No fewer than eight other Marvel films are on Disney’s slate. Could Buckinghamshire be their home?

What does this mean for the British film industry?

The money being spent by Disney on the facilities and workforce will certainly be welcome. Foreign film companies spent £1.6bn shooting in the UK in 2018 – double the figure five years previously.

It has all led to a rush for studio space, and new facilities are planned for Dagenham in east London, Liverpool, Edinburgh and Leeds, while there are plans to expand Shepperton with 16 new stages that won’t be part of the Netflix hub.

A report published in October by property company Lambert Smith Hampton said land the size of 100 football pitches was needed to meet demand.

LSH head of media Christopher Berry told BBC News: “The situation is actually worse now than it was when the report was written. And obviously, the Shepperton deal has taken more supply off the market. What’s happening is people are going into converted warehouses as as a cheap way of converting and creating space.”

There will be concerns that productions with less clout will find it harder to find a studio. Two hundred independent British films were shot in 2018 – a 42% drop over five years.

7 Ways to catch a woman's attention and keep it

7 Ways to catch a woman's attention and keep it