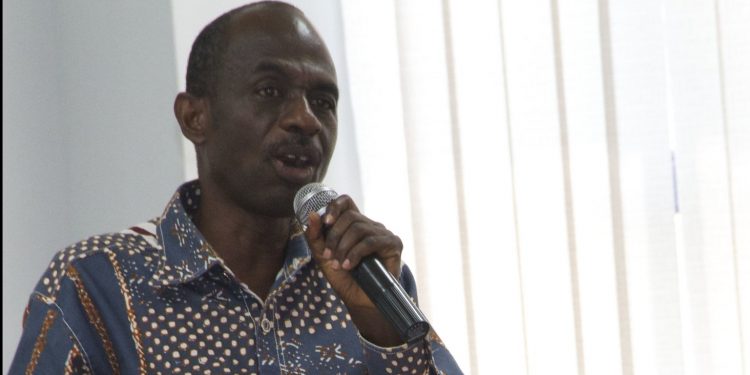 The General Secretary of the opposition National Democratic Congress (NDC), Johnson Asiedu Nketia believes President Nana Akufo-Addo and the governing New Patriotic Party have lowered the standard for the fight against corruption in Ghana.

Addressing the media on Tuesday, Asiedu Nketia insisted that the President “lowered the bar for the fight against corruption at the Bar conference” held on Monday.

The NDC scribe also argued that the NDC cannot accept blame for the numerous corruption scandals that have plagued the governing party.

“His [President Akufo-Addo’s] failure to admit the existence of corruption in his government is a very clear indication that he does not even recognize the problem and cannot be counted upon to address it. Because if you don’t know the problem, how can you solve it? So those of you who are counting on him and hoping that one day he will get up and fight corruption, your hopes will be dashed.”

“His claim that the uncountable number of corrupt deals and practices that have come to light since he assumed office is the handiwork of the opposition is another example of a leader who is totally out of sync with the aspirations and concerns of the people he governs. President Akufo-Addo must accept full responsibility, for the enviable accolade he has gained as the most corrupt president in Ghana’s history which hangs around his neck, and find out why it is so.”

The NDC General Secretary was addressing the media against the backdrop of President Akufo-Addo’s speech delivered on Monday at the Bar Conference held in Takoradi.

Contrary to criticisms that the President has become a “clearing agent” exonerating his appointees accused of corruption, Nana Akufo-Addo argued otherwise.

The President insisted that all his appointees accused of corruption have been exonerated because they were declared innocent by investigative agencies directed to probe such claims made against them.

He accused the opposition NDC of fabricating corruption allegations against his appointees.

But Asiedu Nketia insisted that, the President is not in sync with the reality on the ground and described his alleged corruption achievements as “hollow.”

“The people of Ghana have been witnesses to the hypocritical and duplicitous attitude which he has approached corruption. He [President Akufo-Addo] believes somehow that, flowery speeches and empty rhetoric, delivered in an acquired assent is what convinces people that corruption is being fought.”

On claims that the government saved about GHc2.75 billion by reviewing sole-sourced procurement contracts, the NDC scribe challenged the President to publish the full list of such projects.

“President Akufo-Addo claimed that he had saved the country about GHc2.75 billion through the rejection of sole-sourced contracts presented to the PPA, didn’t he know that the PPA boss was actually the source of the sole-sourced contracts? We wish to submit this that this claim is false and challenge the president to publish the full list of all the specific cases of saving,” he added.

‘University Council has power to convert halls, not gov’t’ – NAPO