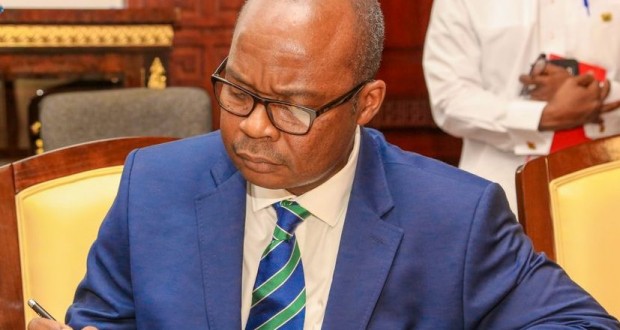 The Bank of Ghana on Friday announced that it has dismissed a staff who took bribes to facilitate an award of a mobile money interoperability contract to Sibton Switch.

According to the central bank, its employee Gilbert Addy who was the project manager for the interoperability project collected as much as GH¢410,000.00 in bribes and other shady payments to help deliver the contract to Sibton Switch.

According to the Bank of Ghana Mr. Addy subsequently “deleted his email records to hide his misconduct.”

How Gilbert Addy was caught

According to the central bank, Mr. Addy was listed as Director and Shareholder of the Company.

These corrupt payments and bribes were uncovered by the Bank’s International Legal Counsel, Hogan Lovells, during their preparation of the Bank’s defence to the arbitration claim brought by Sibton Switch, in respect of the terminated contract.

As part of their preparation for the hearing in London, International Legal Counsel undertook two fact-finding and investigative missions to Ghana from 14th – 17th August 2018 and subsequently from 8th – 17th May 2019, to gather and collate evidence.

“During these two missions, they gathered materials and interviewed all members of BoG staff who had been involved in this transaction, one way or the other.

“The investigations revealed a sham contract signed between Sibton Switch Limited and the shelf company, GIB JUST Systems Limited, which showed that further payments totalling USD $500,000 (GH¢2.7 million) were to be paid to him.

The investigation also revealed the depth of involvement of Mr Gilbert Addy who deliberately concealed from the Bank of Ghana, the payments received and the USD $500,000 sham contract with Sibton Switch Ltd. Indeed, he deleted his email records to hide his misconduct,” the BoG said in a statement.

According to the bank, it became necessary for the Bank and its international lawyers to retrieve these records from email back-ups. These corrupt payments were also concealed from EOCO during their initial investigations into the Sibton Switch contract, in early 2017.

“Mr. Gilbert Addy was the Project Manager leading the interoperability project. His role was to safeguard the Bank’s interests in the project but instead he accepted huge bribes (which were more than 14 times his annual salary at the Bank of Ghana),” the Bank added.

The Bank of Ghana further stated that the misconduct by Mr Gilbert Addy was of the most serious nature and a gross violation of the trust placed in him, breaching the Code of Conduct for Bank of Ghana staff, and the BoG Senior Staff Rules and Conditions of Service, as well as the Bank of Ghana Code of Ethics