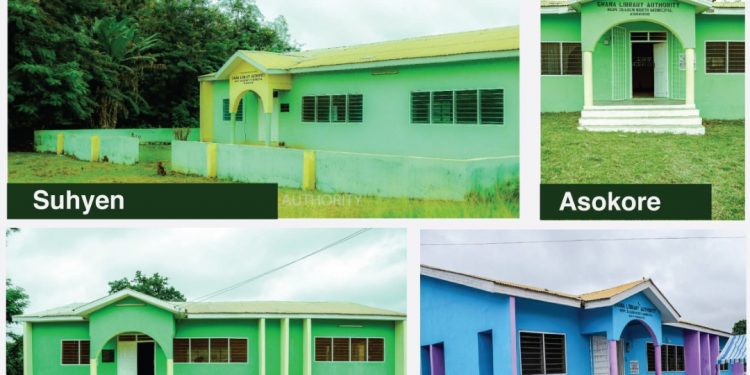 This expands the government run network of public libraries in Ghana to 67 under the management of the Library Authority.

The four libraries, originally built in 2003 by former Member of Parliament for New Juabeng North constituency, Hackman Owusu Agyeman had been closed down for many years, but has now been absorbed by the Authority.

The action of the Authority to absorb and reopen the library is in line with its Year of Reading plans to expand its access points for Ghanaians to benefit from professional library services.

Speaking at a short ceremony to officially reopen the library, the acting Executive Director of GhLA, Hayford Siaw said, “the library Authority is on a path of rebirth and total transformation to connect Ghanaians to knowledge resources through the adoption of technology and traditional static libraries and these four libraries are being opened at a time when the Library Authority is tasked by government to expand services for the benefit of many young Ghanaians in our communities.”

He continued, “many young Ghanaians are getting educated than ever before and the need for quiet places in our communities to self-study and undertake research has become a necessary social service and the Library Authority is delighted to be leading that effort”.

The GhLA Boss commended the New Juaben Municipal Chief Executive, Comfort Asante on the leadership shown in collaborating with the Library Authority to open the four libraries located in Oyoko, Asokore, Suhyen and Effiduase for the benefit of the people.

He used the occasion to urge philanthropists and corporate institutions willing to invest in libraries and reading promotion for the public good.

The MCE of New Juaben North Municipality, Comfort Asante, expressed joy about the commissioning of these libraries.

She praised past leaders for their foresight in putting up the buildings.

“These Libraries will benefit most basic and Senior high schools students to undertake their homework activities and access supplementary resources.”

She charged the Library Authority to consider more libraries for absorption into the public network in the municipality.