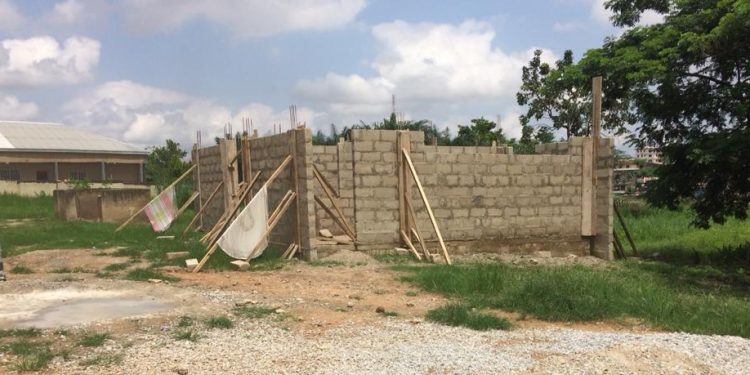 Citi News has gathered that works on some projects earmarked under government’s one million one constituency projects in the Ashanti region have halted for over a year.

Ahead of the 2016 general elections, the New Patriotic Party (NPP) stated in its manifesto that as part of measures to transform Ghana, it was going to adopt a localized development approach known as the Infrastructure for Poverty Eradication Programme (IPEP).

One District One Million Dollar

Annually, every constituency is entitled to one million dollars to finance capital expenditure.

This involves upgrading and improving infrastructure and developing new facilities, especially in rural and deprived communities.

After the NPP assumed office in 2017, President Akufo-Addo set up the Ministry of Special Development Initiatives to oversee the implementation of this aspect of the manifesto.

Meanwhile, Citi News checks in the Ashanti region show that works on several projects under the initiative have halted in some areas with some having been abandoned for over a year.

In the Oforikrom constituency, the construction of a 10-seater water closet institutional toilet with mechanized borehole at the Ayeduase Roman Catholic basic school has not seen any major work for over a year now.

The only toilet facility in the school which is being shared with some members of the Ayeduase community, is in a bad shape.

Pupils who use the facility say they smell bad after using it and are unable to return to class for fear of being teased by their colleagues. Teachers are also negatively affected by this.

This has been a major source of worry for the pupils. They are demanding answers as to why the project which will help address their challenge has stalled.

They are therefore calling for it to be completed as early as possible.

“A new toilet facility is being constructed for us but work on it has halted. We are pleading with the government to complete it for us,” a pupil appealed.

“We want them to complete this project for us because we face serious issues with respect to getting access to toilet facilities,” another added

Also at the Kokoben MA school within the Oforikrom constituency, work on a similar project has halted. A project in the same constituency at the Bomso MA school has not seen any major action for some time now.

Citi News checks at the school revealed that there are no toilet facilities within the school as pupils and teachers move outside the school premises to respond to nature’s call.

Authorities of the school say this development affects academic work badly as some pupils take advantage of it to skip classes or run home.

They believe when this project is completed, their challenge would be resolved.

According to the Municipal Chief Executive of Oforikrom, Gloria Temmah Gambrah, they have made several attempts to get the contractors to get back to work but that has been unsuccessful.

GloriavTemmah Gambrah said she is reliably informed that the contractors have been warned by the Ministry of Special Development Initiatives to go back to the sites or risk losing the contracts.

She added that although the projects being embarked on under IPEP in the constituency are priorities for them, they want other pressing issues such as construction of their inner roads to be looked at.

“What myself and my engineer do is that we normally go round to see what is happening whether they are back on site or not. For talking to them, it is the MP who does that. When he spoke to them and they were not coming, he reported them to the minister in charge of those projects and according to MP, they wrote a warning letter for the contractor to go back to site to complete the work. They have even been given a second warning. The projects in the constituency are good and timely but we also have a challenge with our road network. If you look at Oforikrom Constituency, our major problem is our road network- inner roads”.

In the Nsuta-Kwamang-Beposo Constituency, some projects have been completed while work is currently ongoing for some time now.

But work on a water project to supply the Nsuta health centre with water has not seen any major progress for some time now.

During Citi News’ visit to the site, weeds had grown around the project.

The assembly, the Sekyere Central district assembly says they were not properly involved. They say while some of the projects are important, they do not reflect the needs of the people and the actual areas that need such projects were not taken into account, as major priority projects such as construction of classroom blocks, building of CHPS compounds and rehabilitation of other health centres were not captured.

According to the District Director of works at the assembly, Jacob Owusu Osae, some projects submitted to the ministry as part of its priority projects, have not been considered.

“We were not involved in the awarding of the contracts. With the projects they selected too, most of them are not part of the projects we submitted to them that we need. When they are procuring, we don’t know what goes into it”.

In Tafo, work on most projects have halted as there are no signs of when work will possibly resume on them.

Construction works on projects at the Ahenbronum Assemblies of God basic school, Osei Kyeretwie Senior High School, Tapass basic school and the Uthmaniya SHS appear to have been abandoned for some time now.

In the case of the Uthmaniya SHS, a water project is earmarked to be constructed for the school as they face serious challenges with respect to getting access to water, but works on the project have come to a standstill. There is no water facility in the school.

This project when completed will help address this challenge the school has been facing.

In the Ejisu Constituency, per IPEP’s list of projects in the area, only a toilet facility at Achinakrom SHS had been completed at the time of our visit.

The Public Relations Officer of the Ministry of Special Development Initiatives, Moro Kabore however insisted that the projects have not been abandoned.

He said work on the projects have halted for some time because the contractors are raising payment certificates in order to ensure they are paid before they continue work.

“When the contractors were given the award, there was no mobilization. They had to mobilize their resources just to ensure there is value for money and that government doesn’t pay money to people for no work done. Many of them started the work, they have gotten to a stage, they have raised payment certificates and the payment certificate must go through a validation process. The consultants first have to attest to the fact that the project has been done. It will then go to the development authority and they will then attest to the fact that it has been done. It will also come to the Ministry of Special Development Initiatives before we forward it to the Ministry of Finance so the contractors would be paid”.

On the issue of not properly involving the assemblies to ensure effective implementation and proper supervision as stated by some assemblies, Moro Kabore said there has been adequate involvement of the assemblies. He added that a ten-member committee was set up in all constituencies in the country to critically assess the needs of various constituencies and came up with community-specific projects that reflect the needs of the people in the area before awarding contracts.

He said the amount was subsequently sent back to government coffers. The allocation for 2018 was made after the development authorities were created.

He said the current projects are part of the allocation for the 2018 projects. He further disclosed that the 275 ambulances being procured by the ministry to ensure each constituency has one ambulance, is captured as part of the 2018 allocation.

The ministry says the various constituencies have finished utilizing their allocations for 2018, adding that some constituencies have even overspent the one million dollars that was allocated to them. According to him, the 2019 allocation has been released but it is going through procurement processes.

The PRO of the ministry says the Development Authorities have a multi-year budget meaning the allocation for 2019 and 2020 has already been budgeted for.

He says in order to check transparency and accountability, the finance ministry pays the amount directly to the contractors after it certifies their documents.

125kg of cocaine intercepted in Tema by NACOC officials