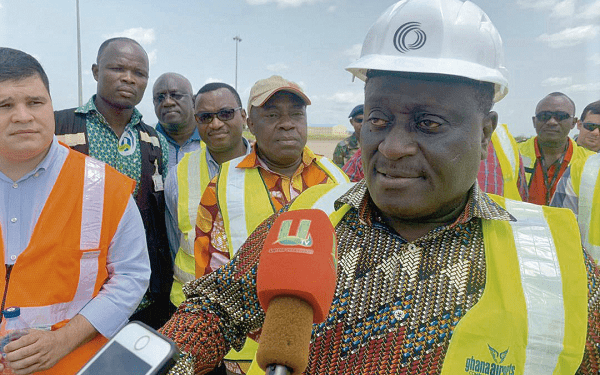 The Ministry of Aviation has handed over relevant portions of the Tamale International Airport to contractors for the second phase of the expansion project of the facility.

The Deputy Minister of Aviation, Mr Yaw Afful, said the phase two, estimated to cost $70 million, is expected to be completed in 30 months.

It comprises the construction of a main terminal on a 5,000m² area, a multi-purpose facility that would cover 1,000m² to be used for Hajj pilgrimage purposes, and an eight-kilometre asphalted road linking the airport to the Tamale-Bolgatanga road.

Mr Afful said as part of the government’s vision of making Ghana the aviation hub of West Africa, construction works were ongoing at the Kumasi Airport, while works would soon commence at the Sunyani Airport.

He said domestic flight services were scheduled to commence at the Wa Airport in the Upper West Region, with the first flight scheduled for October 15 this year.

Mr Afful stated that a new airport in Takoradi was also being considered.

He said the construction works at the Tamale Airport will create both skilled and unskilled jobs for the people of the Northern Region.

The deputy minister, therefore, appealed to all stakeholders and residents of the area to cooperate with the contractor during the 30-month construction period to ensure fast and good job delivery.

The Director of Airport Planning and Projects of the Ghana Airport Company Limited, Mr Yaw Appiah Danquah, said all conditions and approvals required for the commencement of the second phase project had been met.

Those included cabinet and parliamentary approvals and Public Procurement Authority (PPA) certifications, he said, adding that a commencement date would be set accordingly with the contractor.

President Nana Addo Dankwa Akufo-Addo cut the sod for the commencement of the second phase of the Tamale Airport expansion project on August 15 this year.

The United Kingdom Export Finance (UKEF) is financing the project, with support from the German development bank, KfW-IPEX Bank.