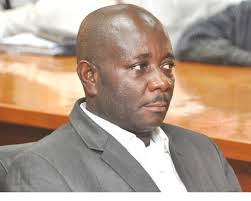 The National Executive Council of the United Progressive Party (UPP) has dismissed its flagbearer and founder, Akwasi Addae Odike.

The executives of the party accused Mr. Odike of draining the party’s coffers and failing to account for cars that were handed to him by the party.

Acting General Secretary of the party Abubakar Kuoru spoke at a news conference in Kumasi.

“We have called him to talk to him but he has refused to reason. On 12th March 2019, we had a press conference and invited him but he refused to come.”

“Secondly, he has dissipated our funds. We gave him party cars from our party financiers and we don’t know where the cars are. He has also been given money to help us run our political activities and policies. As of now, there is not even GHc1.00 in our coffers. He has drained all the coffers,” he declared.

Mr. Kuoru further justified the flagbearer’s dismissal, saying that the party wasn’t for any particular individual, but for every Ghanaian.

He asked, “Which political party is owed by one man? If that was the case, then JJ [Rawlings] will come for his NDC. When we went to register the party, Dr Afari Gyan made it clear. He said we are the ones founding the party but it doesn’t belong to one man. In fact, it is for all Ghanaians.”

“Anybody can come and take a membership form, become a member and run for the presidential slot of the UPP. In that same vein, we can sack you if you misbehave. It is not by us, it is by our constitution.”

This is not the first time the party has had challenges with the flagbearer, and have already made several attempts to sack him from the party.

Three years ago, some executives of the party dragged Akwasi Addai Odike to court to prevent him from filing nomination forms to contest in the 2016 elections.

The action was taken by the then National Organizer of the party, Stephen Kwaku Saahene and some of their regional executives.

He, however, withdrew from contesting in the presidential race, claiming it was based on a personal decision, and not the party’s suit against him.

The United Progressive Party was formed in 2015 with its main focus of creating wealth through industrialization, science, and technology.

Stephen Adei appointed as chair of GRA Board