UPSA’s tussle over land leaves one person in critical condition

A tussle over a land supposedly acquired by the University of Professional Studies Accra (UPSA), on Wednesday left one person in a critical condition after he was run over by a car.

According to the university, some persons suspected to be land guards were seen destroying an aluminum sheet fence around the land.

The Head of Legal Services for the university, Fortunate Fio in an interview with Citi News, argued that the land had been registered in 2006 hence the university is determined to protect its property despite the threats.

Reports say during a heated exchange with the police, one of the purported land guards was run over by a speeding vehicle in an attempt to flee the scene.

But the man accused of being a land guard has refuted the tag.

According to him, he is a government official tasked to reclaim state lands.

“I’m in charge of government lands reclamation. This is a state land acquired by executive instrument documents. Any state land that has been acquired and has been encroached on by individuals and organizations, I’m in charge to identify and reclaim the land.”

He alleged that UPSA is not a legitimate owner per the search in Land Commissions’ records hence they were encroaching on a government’s land.

The land is not for the university. The search on the land shows that the land is for Lands Commission. The land is under Ministry of Lands, there is an official post on it. Now they put a sign post that it’s for UPSA, one man claimed that the land is for him and he is selling it to UPSA. But the search doesn’t state that it is for UPSA. So we went to take off sign post and the roofing sheet from the land. At the site people gathered so a woman was taking video so I asked her to stop taking the video, she was still taking the video. So we stop the woman but she won’t stop. So I said they should pick the phone then the police were coming who work with me.”

He also denied reports that his men slapped a police officer.

Rather, he accused one Dr. Kwaku Agyapong owner of a factory close to the disputed land, of knocking down one of his men with his car. 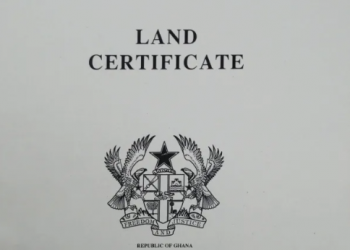 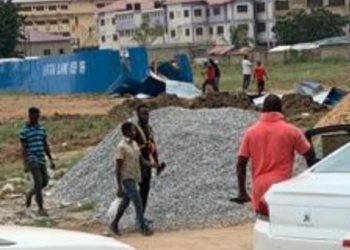